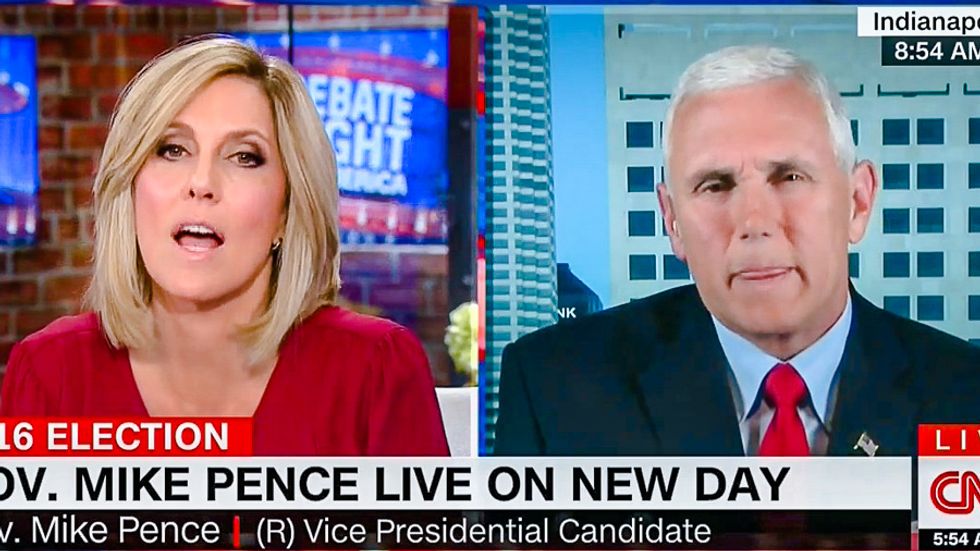 Vice presidential candidate Mike Pence on Monday could not explain why he continued to support Donald Trump after he was caught on tape boasting about sexual assault in addition to prior attempted rape allegations.

Pence argued to CNN's Alisyn Camerota that he had not quit the race because he had insisted that groping "was not something that he's done" even though he claimed he had done it in a leaked Access Hollywood video.

"I found it offensive," the V.P. nominee shrugged. "And I was glad that he apologized and expressed genuine remorse. But at the end of the day, the stakes in this election are extraordinary. We literally have parts of the wider world that are spinning apart because of the weak and feckless leadership of this administration."

Pence added that it was "absolutely false" that he ever considered dropping out of the race as some reports have suggested.

Camerota pressed the Indiana governor about whether he would resign "if in fact Donald Trump had done those things that he said he had done to women."

Pence, however, cited Monica Lewinsky and asked Camerota to compare Trump's actions to "what the Clinton's were involved in 20 years ago," So the CNN host took him up on the suggestion.

"Bill Clinton admitted to being involved with a 23-year-old intern," Pence said.

"And Trump has admitted to being unfaithful to his wife," Camerota interrupted.

"Bill Clinton paid a settlement to one of the women," Pence continued.

"And Donald Trump had a settlement to the woman who accused him of attempted rape," Camerota shot back. "There's a whole New York Times profile about it... They are so parallels. That's why I ask you about going down that road again."

Unable to defend the parallels between Bill Clinton and Trump, Pence once again insisted that groping admission from Trump "were words, not deeds."

"The comparison to the avalanche that came out of the avalanche of scandals that came out of the Clinton years that were the subject of repeated denials, I get all that," Pence remarked. "But at the end of the day, we've got four weeks left in this election and there are two human beings on the ballot -- let's stipulate to that. But more important, there are two futures."