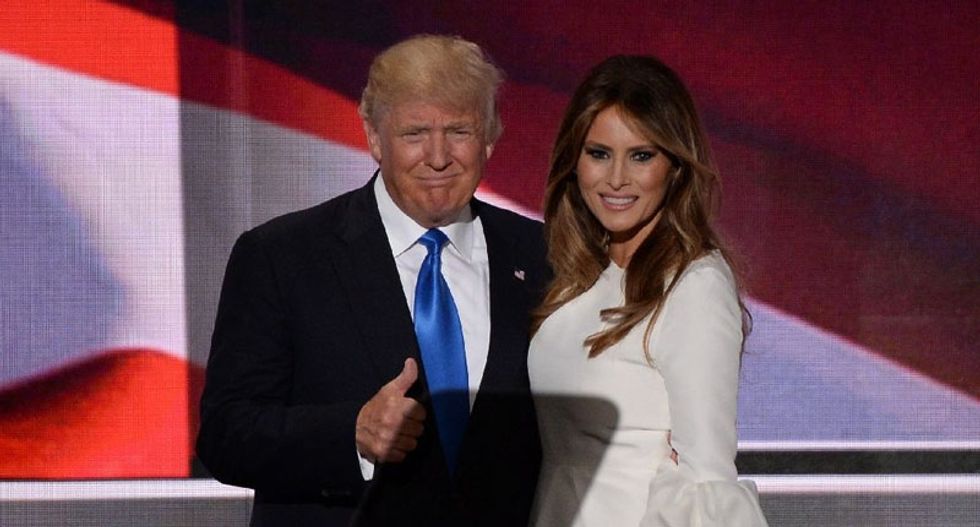 Donald Trump stands on stage with his wife Melania Trump following her address to delegates at the Republican National Convention in Cleveland, Ohio, on July 18, 2016 (AFP Photo/Robyn Beck)

Stoynoff spoke out about her assault after Trump denied that he had ever groped or kissed women without consent. She recounted that during an interview with Trump at his Florida Mar-a-Lago estate, he "shut the door behind us. I turned around, and within seconds he was pushing me against the wall and forcing his tongue down my throat." Trump reportedly told her, "We’re going to have an affair, I’m telling you.”

People magazine revealed 6 witnesses who confirm Stoynoff's account of what happened during her 2005 interview with Trump. Witnesses included colleagues and close friends of Stoynoff, including her friend Liza Herz, who was with Stoynoff the day she ran into Melania Trump on 5th Avenue.

The Trump campaign has denied all allegations that have been made against the Republican nominee. His wife Melania also released a statement last week, which she spoke about in a Monday interview with CNN's Anderson Cooper and denied Stoynoff's story.

She said, "The story that came out in People magazine, the writer she said my husband took her to the room and started kissing her, she wrote in the same story about me that she saw me on 5th Avenue, and I said to her ‘Natasha, how come we don’t see you anymore?’ I was never friends with her, I would not recognize her."

However, Herz remembered the two running into each other, noting "They chatted in a friendly way. And what struck me most was that Melania was carrying a child and wearing heels."

Herz is not the only witness to come forward. The five other witnesses include Marina Grasic, who told People that Stoynoff called her the day after the assault and detailed what happened to her.

Her former journalism professor Paul McLaughlin also spoke with People about Stoynoff's story and said that she called him that same night seeking advice.

The other witnesses include People's East Coast Editor Liz McNeil, their Deputy East Coast News Editor Mary Green, and a coworker named Liza Hamm. Each witness spoke to Stoynoff's character — both personal and professional and detailed how the reporter shared her story.

McNeil told People, "She was very upset and told me how he shoved her against a wall." She continued, "The thing I remember most was how scared she was. I felt I had to protect her."

Hamm, a coworker and friend shared, "Natasha has always been a vivacious person who wants to believe in the best of people, and this experience definitely messed with that outlook. But she is also a consummate professional. She told me that she asked to be taken off the Trump beat, but she tried her best to move past the experience and continue to do her job well."

Last week, Jerry Falwell Jr. told CNN that Trump reportedly has "email evidence proving sexual harassment accusations against him are false." However, the Trump campaign has yet to release any such evidence.

Stoynoff's story is one among at least 17 other stories of sexual harassment or assault involving the Republican nominee, including 10 women alleging that he had groped them.

The Trump campaign continues to deny these accusations, and have pushed forth the narrative that these women are coming forward now as part of a smear campaign just weeks ahead of the election.

However, this abusive narrative doesn't quite hold. During campaign rallies last week, Trump called his accusers liars. He said of Stoynoff at a Florida rally on Friday, "Look at her, I don’t think so."

(Note: This article was updated after People magazine published an article on Tuesday afternoon about the sexual assault accusations.)