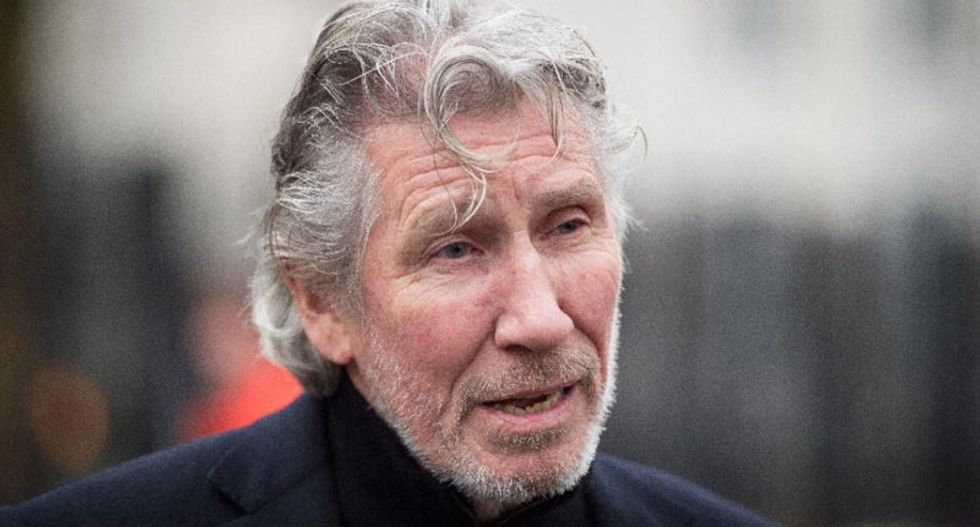 Rocker Roger Waters savaged Donald Trump with a pig balloon caricature as he vowed to make the most of his platform Sunday at a first-of-a-kind festival of rock elders.

The former Pink Floyd songwriter, who also renewed his longstanding criticism of Israel, closed out the first three-day weekend of Desert Trip which earlier brought the Rolling Stones and Paul McCartney to the vast stage in the Southern California desert.

As Waters played "Pigs (Three Different Ones)," Pink Floyd's 1977 assault on power mongers, an oversize swine-like balloon floated into the crowd with a sketch on it of the Republican presidential candidate.

"Ignorant, lying, racist, sexist," ran the words on the balloon's side, as overhead screens flashed inflammatory quotes by Trump including his boasts of groping women that were recently aired in an explosive video.

Unflattering drawings of Trump -- in one he is naked with a miniscule member and in another he androgynously has developed breasts -- also appeared on screens before the message in bold letters: "Donald Trump is a Pig."

Waters drove home the point with a notch more subtlety as he performed Pink Floyd's classic "Another Brick in the Wall," bringing to stage a troupe of singing teenagers, mostly ethnic minorities, who wore T-shirts that read "Derriba El Muro" -- Spanish for "tear down the wall."

Trump, who is running against Democrat Hillary Clinton in the November 8 election, launched his campaign on promises to build a wall on the Mexican border as he alleged that undocumented immigrants were rapists. 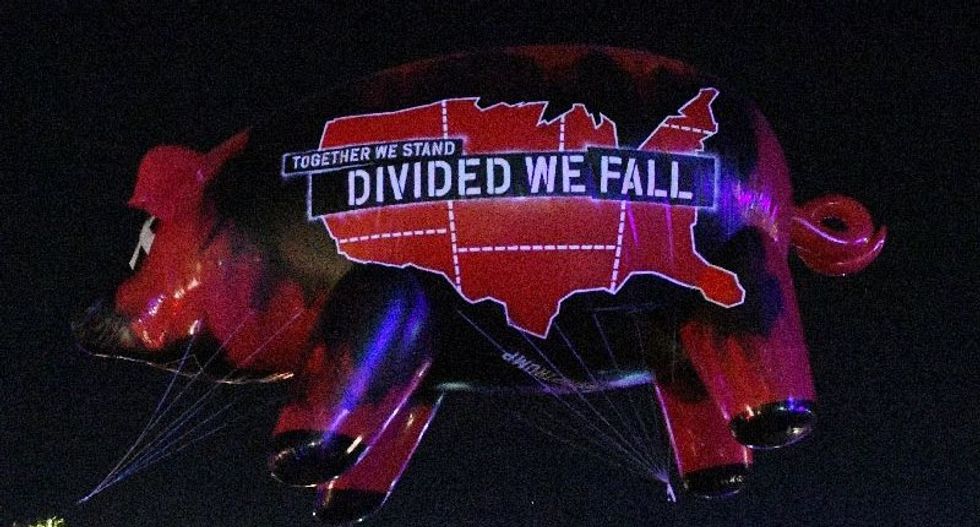 A pig bearing a 'Stop Trump' message is towed into position during the Roger Waters performance on the third day of the Desert Trip music festival at Indio, California on October 9, 2016 (AFP Photo/Mark Ralston)[/caption]

"The Wall," Pink Floyd's rock opera, takes the barrier as a symbol of personal isolation but it has since frequently become a political metaphor, with Waters proudly an activist.

Speaking to the 75,000-strong crowd, Waters hailed California students at the forefront of the so-called Boycott, Divestment and Sanctions campaign that aims to exert economic and cultural pressure on Israel.

"It's rare that somebody like me gets a platform like this, so I'm going to use this platform," said the 73-year-old British rocker.

"I'm going to send out all my most heartfelt love and support to all those young people on the campuses of the universities of California who are standing up for their brothers and sisters in Palestine," Waters said, hoping the boycott movement would "encourage the government of Israel to end the occupation."

Israel and a number of US Jewish groups strongly oppose the movement and recently won a victory when California barred companies that do business with the state from shunning individual countries.

While Waters's anti-Trump stance elicited cheers, albeit not universally, his statement on Israel drew a more muted response with some fans clapping but others booing and at least one proudly waving an Israeli flag as a counter-protest.

Waters is well-known for his criticism of Israeli policy and in 2013 came under fire from Israel supporters for putting a Star of David on the inflatable pig.

Politics aside, Waters crafted the festival's most intricate presentation with the stage transformed into a "dark side of the Moon" and echoing voices reinforcing the music's sense of dislocation.

Desert Trip, which will take place again next weekend with an identical lineup, is forecast to be the most lucrative festival ever with aging baby-boomers paying premium prices for the so-called "Oldchella."

Other performers were Bob Dylan, Neil Young and, on Sunday, The Who, the other pioneers alongside Pink Floyd of the rock opera.

The Who offered an ultra-abridged tour through the baby-boomers' world with news clips showing events from the Vietnam War to last year's Paris attacks as the group played a blistering "The Rock" from its "Quadrophenia" opera.

Singer Roger Daltrey still managed his intense, gritty screams and Pete Townshend his 360-degree arm-swings of his guitar -- but the septuagenarians showed no reserve in joking about their age.

Introducing "I Can See For Miles" as their first hit in the United States, Townshend quipped: "We were sort of 1967's version of Adele or Lady Gaga or Rihanna or Justin Bieber."

And Townshend remembered that the weekend would have been the birthday of bassist John Entwistle -- found dead by a Las Vegas stripper after a cocaine overdose in 2002. Wherever he is, Townshend said, "Have a line for me, John."