Republicans tar Trump as undemocratic for threatening to jail Clinton 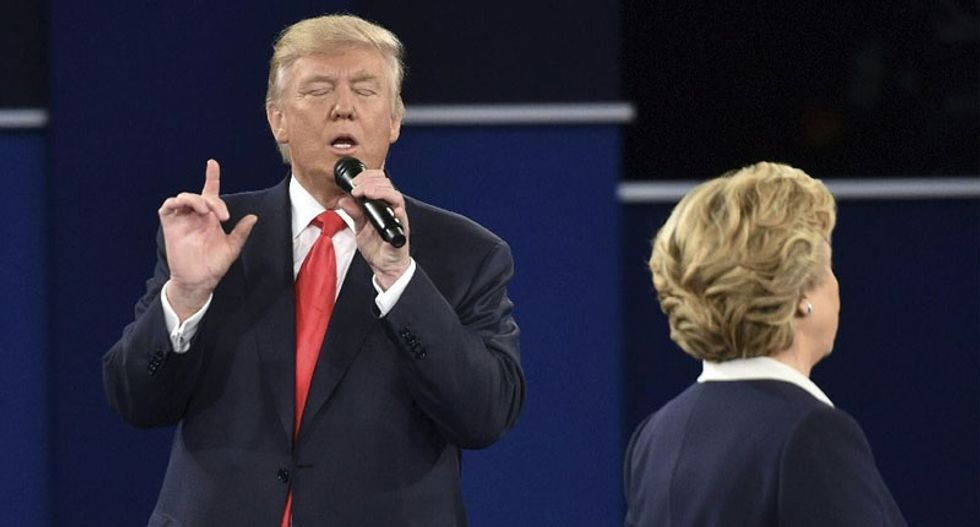 Donald Trump threatened to jail rival Hillary Clinton and accused her husband of abusing women in a vicious presidential debate that appeared unlikely to improve his ratings after a damaging weekend, polls showed Monday.

Before tens of millions of viewers and a live audience including Bill Clinton and three women who accuse him of past abuse, the Republican nominee shattered the last vestiges of political decorum and issued incendiary allegations against the former president.

With his campaign in a tailspin, Trump apologized for "locker room talk" in which he bragged about groping women, but stated baldly that "Bill Clinton was abusive to women."

"If you look at Bill Clinton, far worse," Trump insisted. "Mine are words, his was action," he said.

Going a step further, the 70-year-old real estate mogul threatened his 2016 Democratic rival -- whom he accused of having "hate in her heart" -- with imprisonment if he wins the presidency.

"If I win, I'm going to instruct the attorney general to get a special prosecutor to look into your situation because there's never been so many lies, so much deception," Trump said.

Hillary Clinton, facing a deeply wounded candidate with one month to go before Election Day, pushed back by saying Trump's lewd comments merely showed his true self.

"This is who Donald Trump is, and the question for us, the question our country must answer is that this is not who we are."

When Clinton said that it was "awfully good" that someone with Trump's temperament was not leading the nation, he shot back: "Because you'd be in jail."

A CNN/ORC survey of debate watchers put her 57-34 up while a YouGov snap poll put her margin of victory closer at 47-42.

President Barack Obama's former attorney general, Eric Holder, led the broad condemnation of Trump's threat, as critics painted him as a dictator in the making.

"In the USA we do not threaten to jail political opponents. @realDonaldTrump said he would. He is promising to abuse the power of the office," Holder said in a tweet.

A number of fellow Republicans also tarred Trump as undemocratic.

The debate's opening minutes were tense, with Trump slinging mud even at the two moderators, whom he accused of bias -- it was "one against three" he said -- between a continuous series of interruptions.

Clinton, 68, largely refused to take the bait, opting to adhere to advice from First Lady Michelle Obama: "When they go low, you go high."

But, as in the first debate, she also laid a series of traps for Trump, prodding him toward admitting he had not paid federal income tax in around two decades.

By accusing Russia of trying to tilt the 2016 presidential election in Trump's favor with a series of email hacks, Clinton forced her rival to contradict the intelligence community, which has also fingered Moscow.

"She doesn't know if it's the Russians doing the hacking. Maybe there is no hacking," he said.

Trump faces a make-or-break moment after his crude boasts, which he made in 2005 and which became public in a video Friday, as streams of Republicans have retracted their support for his campaign.

With a campaign based on earning free television air time and little ground game, Trump is dependent on the Republican Party machinery to get out the vote.

The party leadership had been deeply angered by Trump's misogynistic remarks, and his own running mate Mike Pence said they were indefensible.

But late Sunday Pence tweeted congratulations to Trump on his "big debate win" and said he was "proud" to stand with him.

In an extraordinary step aimed at reversing the tide of public opinion, Trump had convened a press event just minutes before the debate that included several women who accuse Bill Clinton of sexual harassment and rape -- later invited to attend the debate.

Introduced by Trump as "very courageous women," the speakers included Paula Jones, a former government employee in Arkansas who sued Bill Clinton for sexual harassment, and Juanita Broaddrick, also of Arkansas, who claims that Clinton raped her in 1978.

But Trump needs a dramatic boost if he is to claw back ground against Clinton, who has surged in the polls since their first debate on September 26.

Larry Sabato, who heads the Center for Politics at University of Virginia, tweeted that "Trump has done well enough to stop GOP bleeding."

But Dante Scala, political science professor at the University of New Hampshire, said he doubts Trump can recover.

"I didn't see enough this evening to turn things around," Scala told AFP.

"The news of the last 48 hours will continue to settle into voters' minds and I'm not sure this debate will be enough in itself to change the trajectory of the race."

Steven Smith, a political science professor at Washington University, said this was Trump showing his awareness of a difficult juncture.

"He was the old Donald Trump, he sounded like the Trump of the mid-winter and spring primaries, and I think this was an effort to consolidate the base, to rally the troops, to stem the bleeding and to prevent his candidacy from unraveling all together," Smith said.

Clinton is "ahead in the polls and she probably did herself no damage tonight."