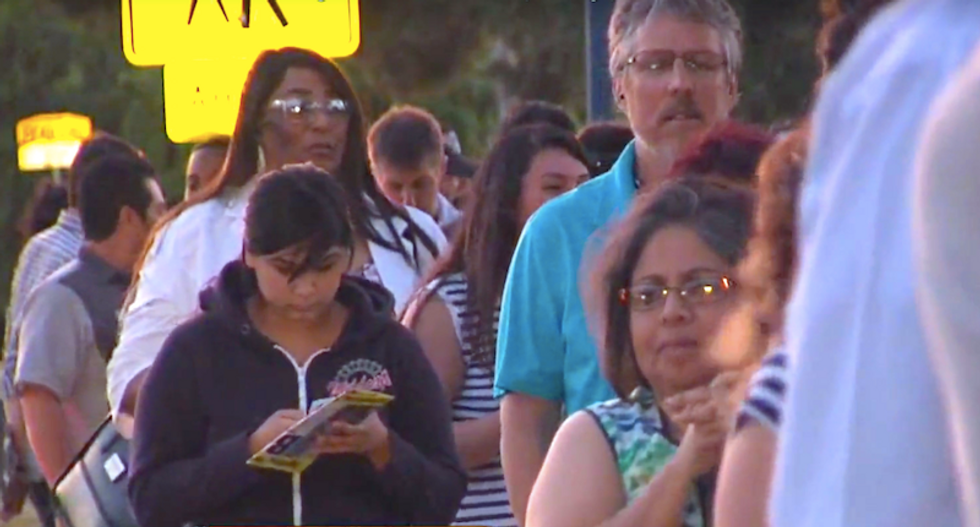 Donald Trump's dangerous calls to monitor polling places on Election Day are resonating in concrete ways with some of his supporters, the Huffington Post reports.

According to a new report, a voter intimidation group associated with the Republican nominee released a new script on Wednesday night for "citizen journalists" who to participate in poll monitoring.

The group, called "Vote Protectors," had originally planned to create fake ID badges for volunteers that would attend polling places in cities with large minority communities, apparently recalling what Trump has said at previous rallies.

Trump has suggested time and time again that the election was sure to be rigged on November 8 and that his supporters should absolutely show up to their polling booths and watch for voter fraud. He said this type of activity was especially likely in "certain areas."

However, his rhetoric is rooted in historically racist voter intimidation tactics.

According to the Huffington Post, the group created a script for volunteers that included questions about voter fraud. Some of the questions included the following:

"Would you say that concern over election fraud is legitimate?" and "Do you think that it will be a problem in the upcoming presidential election?"

The Vote Protectors will head to polling places on Election Day with fake ID badges and were allegedly planning to film voters. These are tactics of intimidation.

The deputy director of voting rights at the nonprofit Campaign Legal Center, Danielle Lang explained how important it is to be educated about voter monitoring and intimidation this year.

Lang said, "It’s important for voters to understand that they should not automatically trust that everyone who walks up to them at a polling station is an official election worker." They added, "Not even poll workers have a right to determine your eligibility to vote."