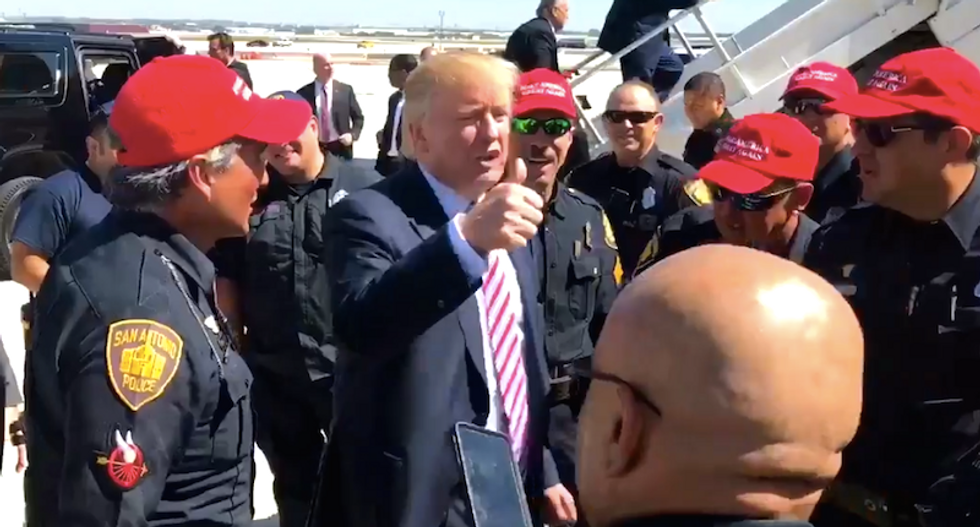 More than a dozen officers in uniform wore the red caps with Trump's slogan as they stood with the candidate at an airport, in a video posted on Trump's Twitter page.

The 25-second clip bears the words "We will make America safe & great again, together" as the officers walk away.

San Antonio Mayor Ivy Taylor later said on Facebook she was "deeply disappointed" by the display and Police Chief William McManus said in a statement the officers showed "poor judgment."

"I expect them to know better than to give the appearance of endorsing a candidate while on duty and in uniform, regardless of the political campaign or the candidate," McManus said.

The identities of the officers was not immediately clear and they could not be reached for comment.

They were escorting Trump at the end of his visit, said Michael Helle, president of the San Antonio Police Officers Association, in a statement.

"Frankly, the officers were most likely caught up in the moment and did not consider the political nature of their actions," Helle said.

Helle told the San Antonio Express-News he expected the officers to only face "benign" punishment, such as a written reprimand.

Last month, the Fraternal Order of Police, the largest U.S. organization of its kind, endorsed Trump. The group's president said at the time his members believed the Republican nominee would "make America safe again."

Trump has described himself as the "law-and-order" candidate at a time when law enforcement has become a major focus of public discussion in the United States.

Violent crime rose last year though it remains far below peak levels of the 1990s.

In the last two years, the country has seen a number of major protests against the deaths of black men in encounters with police, which has sparked a debate over police use of force and the role of racial bias in the criminal justice system.

San Antonio prohibits employees from taking action to support a political candidate while on paid duty but it allows them to engage in political speech on their own time, according to a policy document on the city's website.