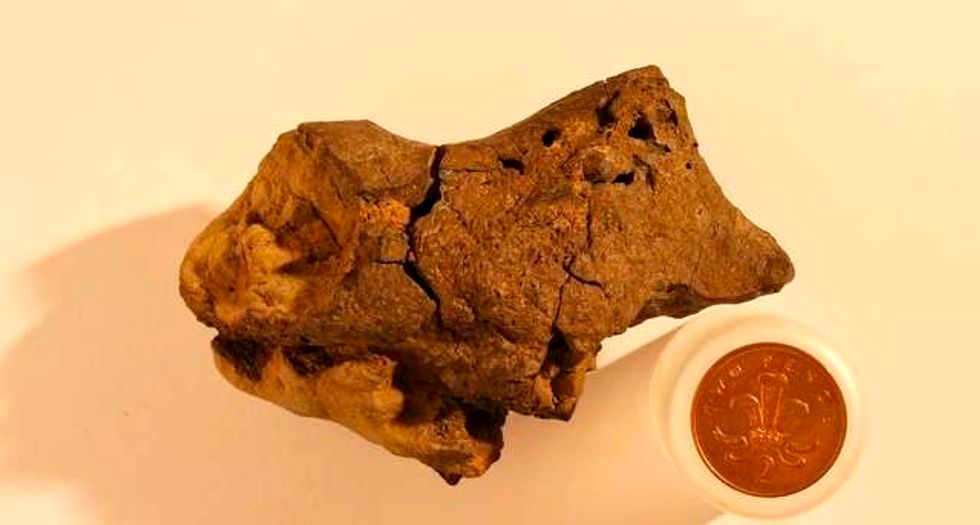 A handout photograph shows what scientists have identified as the first known example of fossilised brain tissue from a dinosaur, and say it resembles the brains of modern-day crocodiles and birds, released in London, Britain October 27, 2016. University of Cambridge/Handout via REUTERS

British and Australian scientists have identified an unassuming brown pebble, found more than a decade ago by a fossil hunter in southern England, as the first known example of fossilized dinosaur brain tissue.

The fossilized brain, found by fossil enthusiast Jamie Hiscocks near Bexhill in Sussex in 2004, is most likely from a species similar to Iguanodon - a large herbivore that lived during the early cretaceous period, some 133 million years ago.

In a report of their analysis in a Special Publication of the Geological Society of London, the researchers said they believed this piece of tissue was so well-preserved because the dinosaur's brain was "pickled" in a highly acidic and low-oxygen body of water – like a bog or swamp – shortly after it died.

"The chances of preserving brain tissue are incredibly small, so the discovery of this specimen is astonishing," said Alex Liu of Cambridge University's department of earth sciences, who worked on its identification.

Cambridge's David Norman, who led the work, said the finding also raised questions about the common perception of dinosaurs as animals with very small brains.

In typical reptiles, the brain is sausage-shaped and surrounded by a dense region of blood vessels and sinuses, meaning the brain itself only takes up about half of the space in the cranial cavity.

The tissue in the fossilized brain, however, appeared to have been pressed against the skull, the scientists said, raising the possibility that some dinosaurs had larger brains.

But Norman's team cautioned against drawing any firm conclusions from this single fossil about dinosaurs' brain size or intelligence levels.

"As we can't see the lobes of the brain itself, we can't say for sure how big this dinosaur's brain was," he said. "Of course, it's entirely possible that dinosaurs had bigger brains than we give them credit for, but we can't tell from this specimen alone."

"A group of right-wing websites and social media personalities, some with hundreds of thousands of followers, claimed that Black Lives Matter protesters 'stormed' Iowa's state Capitol last week," wrote Dale. "Some of them explicitly claimed that the protesters had forced their way into the building," and, he noted, David Harris Jr. wrote this event was "exactly" like the "Stop the Steal" riot.