Scottie Nell Hughes: Trump's rallies are bigger so we must be winning -- just like Romney said in 2012 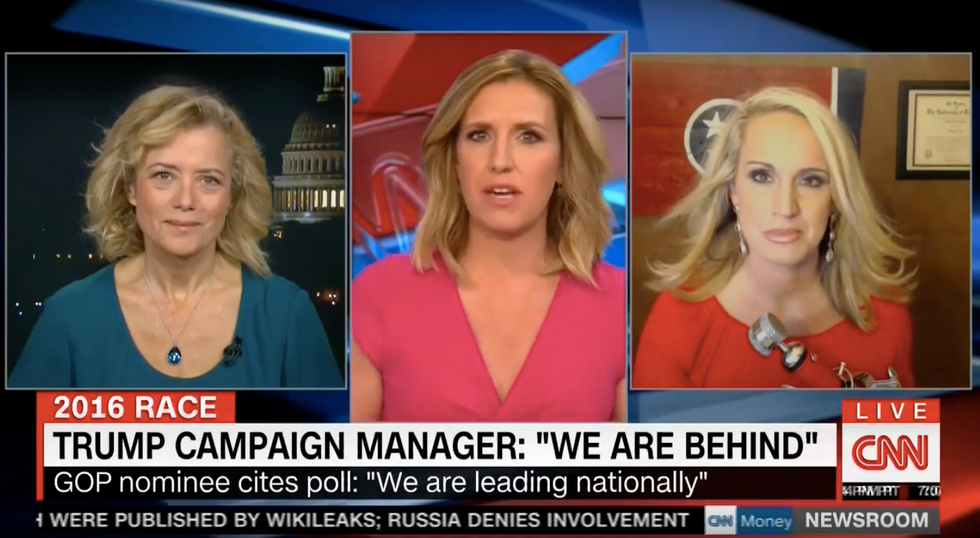 Donald Trump 2016 campaign surrogate Scottie Nell Hughes insisted Sunday that she's not concerned about Trump's falling poll numbers because his rallies are so big and enthusiastic. In 2012, the Romney campaign believed the same about its large and enthusiastic rallies, but the big crowds there did not foreshadow an electoral rout.

So, who's right? Harlow asked. "Are you concerned that your candidate seems to be on a very different page than your campaign manager when it comes to where they stand two weeks out?"

"Well, I don't think they're on a completely different page," Hughes replied. "They've been probably on the same page closer than you see Robby Mook and Hillary Clinton on, after some of the disastrous comments he made this morning."

"But when it comes to Florida, there really is a lot of optimism," she said. "The reason why the Trump team is extremely happy. Right now, they're up in absentee ballots. You have the four events that will have the 50,000 in attendance who Mr. Trump will be eye-to-eye with in the next three days. Early voting just is now starting in Florida in 50 counties tomorrow. They've not even started really to vote in the lines like we've seen in North Carolina and other areas, in Georgia, we're seeing actually the rural areas are the high voter turnout. And you're not seeing the same enthusiasm in the more urban areas which often skew more Democratic."

When asked whether the Trump team is concerned that their ground game is millions of dollars and months behind Clinton's, Hughes airily dismissed the concerns and pivoted to attack Clinton.

"We always knew going into it that the 'Clinton Machine' was going to be huge to defeat, especially when paired up with the amazing machine that the Democrats have built," Hugues said.

Author Hilary Rosen countered with the fact that Clinton is getting the overwhelming majority of women voters.

Hughes replied that the huge numbers of people turning out to Trump rallies puts her mind at rest about the polls. If people are willing to wait in line, sometimes for hours, to see Donald Trump, then they'll do whatever it takes to get to the polls.

In October, 2012, Republican nominee Gov. Mitt Romney was actually drawing larger crowds to his rallies than Pres. Barack Obama. However, Romney lost in the polls. Empirically, crowd size is a lousy predictor of electoral success.