'This is not how a democracy is supposed to work’: Georgians already facing four hour waits to vote 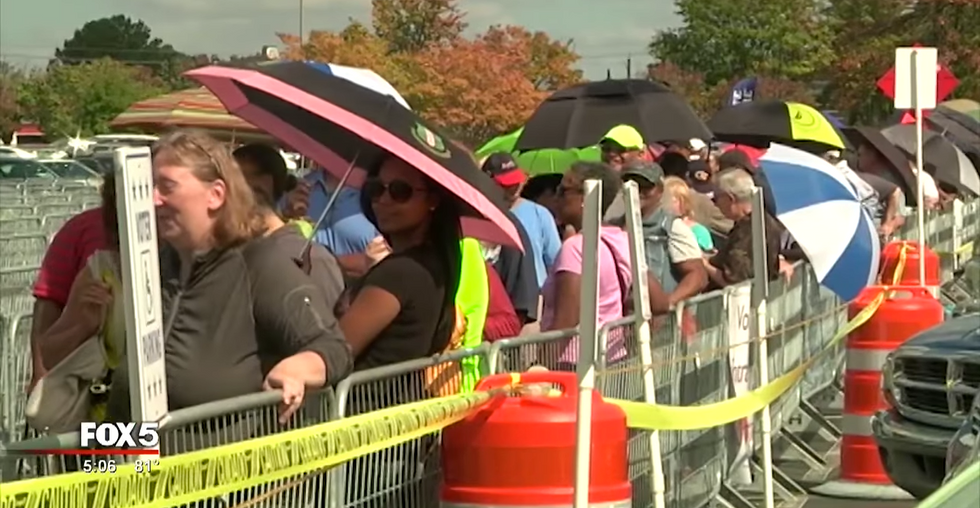 Thousands have headed to the polls for early voting in the weeks leading up to election day, but for some, the long lines are making it harder to exercise their right to vote.

In four Georgia counties, the long lines paired with heat has caused some people to faint while waiting to vote, making the practice inaccessible, according to the Guardian.

Across the state in Fulton, Gwinnett, DeKalb and Cobb counties, early voters were caught up in lines for over two hours while waiting to cast a ballot, and at least three people fainted from heat exhaustion.

However, heat exhaustion wasn't the only thing keeping voters from the polls. While early voting is supposed to offer voters an opportunity to cast a ballot early and with less of a waiting time, many were deterred from the long wait in counties across Georgia.

Georgians spoke with a local NBC News affiliate about the long lines on day one that, for some, took up to four hours out of their day.

One woman explained, "We came yesterday and the line was extremely long so we came back today." However, the process of showing up to the polls and casting a ballot should take less than four hours, especially during early voting.

According to Ike Onyekchi, who spoke with Fox 5 News about voting early in Gwinnett County, "I should be able to vote easier than this. Four plus hours is ridiculous."

As Barrett Pitner writes for the Guardian, "While many were undeterred, countless others went home or back to work with the goal of voting on another day. This is not how a democracy is supposed to work."

Pitner continues, "The images of Georgians waiting for hours to vote three weeks before the election demonstrates not only the significance of this election, but the effectiveness of Georgia’s voter suppression methods."

Not only are long waiting lines a problem facing Georgians this fall, Georgia was also one of 14 states to enact restrictive voting laws this year. The policies predominately affect the state's black and Latino voters, and most often at the expense of Democratic candidates.

Even during the primaries, Georgia was one of nine other states with strict voter ID laws, which were found to have negative effects on Democratic candidates. A study from researchers at the University of California, San Diego found the following:

Democratic turnout drops by an estimated 8.8 percentage points in general elections when strict photo identification laws are in place. For strong liberals the estimated drop in turnout in strict photo identification states is an alarming 7.9 percentage points. By contrast, strong conservatives actually vote at a slightly higher rate — 4.8 points — in strict ID states, all else equal.

Georgia is not the only state where voters are facing long waiting lines and a lack of efficiency at polling places. According to Fox 13 Memphis, on Wednesday morning early voting cards malfunctioned at a polling location in Germantown, Tennessee.

Pitner writes, "These voter suppression efforts must stop – but can that ever happen when a major political party is campaigning to make them even worse?"