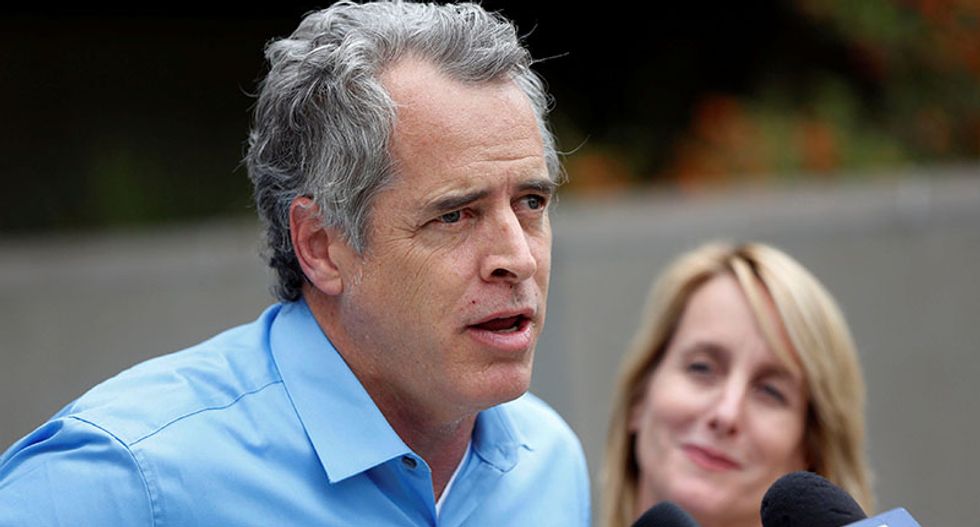 James Otis, the man who admits vandalizing Donald Trump's star on the Hollywood Walk of Fame, speaks to the media with his attorney Mieke ter Poorten about his arrest outside of the LAPD Metropolitan Detention Center in Los Angeles, California October 27, 2016. REUTERS/Patrick T. Fallon

A man arrested on Thursday for defacing Republican presidential nominee Donald Trump's star on the Hollywood Walk of Fame in Los Angeles with a sledgehammer and a pickax said he did it because he was angry at the candidate.

James Otis, 52, speaking to reporters a short time after he was released from jail on $20,000 bail, also said he did it to show support for women who have accused Trump of groping them.

Otis was arrested for felony vandalism and is due in court on Nov. 18, authorities said.

His attack on Wednesday on the star, which Donald Trump received in 2007 for starring in the NBC show "The Apprentice," made national headlines.

Otis was captured on video in a hard hat and reflective vest as he hacked at the star before dawn on a sidewalk in the Los Angeles neighborhood of Hollywood.

The stunt left Trump's name scratched out of the star, the emblem in the middle dislodged and chips missing.

Trump drew widespread condemnations from voters and a number of Republican elected officials after a 2005 video emerged in which he was heard talking on an open microphone about groping women and trying to seduce a married woman.

Trump has denied the allegations made by several women that he groped them.

Otis, in his news conference, said he is taking responsibility for hacking at Trump's star and he criticized Trump for what he described as dodging his responsibility.

"He's a serial liar and misogynist and that's why we're here: to try to address that and help those women who told Mr. Trump they won't stand for it anymore," Otis said.

Otis said that he has been arrested multiple times over the years for civil disobedience.

A spokeswoman for Trump did not return emails seeking comment on Thursday.

Leron Gubler, president and chief executive of the Hollywood Chamber of Commerce, which administers the hundreds of star plaques on sidewalks in the Los Angeles neighborhood, has said the star would be covered for days during repairs.