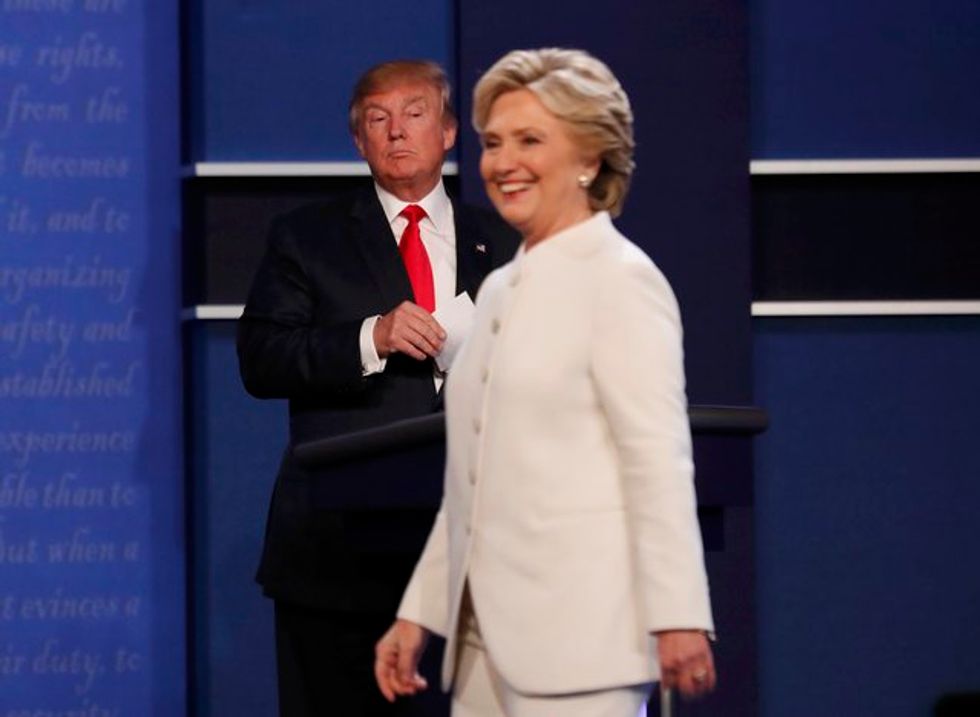 "Such a nasty woman."

With those four words, Donald Trump confirmed for every thinking woman in America that all of his talk that "nobody respects women more than I do," is as worthless as the bankrupt companies that litter his past. Near the end of the debate it became increasingly clear that Trump had lost the plot of the debate. And, as Trump watchers now know, when Donald gets angry and frustrated, he feels a need to dominate and punish the source of his humiliation.

As Trump uttered those words, every woman in America heard the voice of the last man who had tried to convince her that he knew more about something than she did, and then, discovering that she was right and he was wrong, called her a bitch -- or worse -- as a substitute for rational argument. Hillary Clinton became Everywoman on that stage last night.

In the second debate, Trump had stalked Clinton, trying to use his physical size to intimidate her and throw her off her game. The unflappable Clinton ignored him. Last night, confined behind a podium where he couldn't move closer to her, Trump spoke in monosyllables and grunts, muttering into the microphone, "Wrong," as if a single word from him could neutralize the truth bomb that she had just detonated.

The exchange where the "such a nasty woman" comment took place was one where Hillary Clinton was answering a question from moderator Chris Wallace about Social Security. Clinton had already skewered Trump previously over his taxes, when she pointed out that since Trump had refused to release his taxes, it was likely that there were undocumented immigrants in the United States who had paid more in taxes to the United States government than the billionaire.

TRUMP: Such a nasty woman.

CLINTON: ... by making sure that we have sufficient resources, and that will come from either raising the cap and/or finding other ways to get more money into it. I will not cut benefits. I want to enhance benefits for low-income workers and for women who have been disadvantaged by the current Social Security system.

Trump called Clinton a nasty woman after she pointed out again that Trump had taken full advantage of an unfair tax code that allows the rich to claim business losses to justify not paying taxes for a decade or more. When he had been pressed earlier about not paying taxes, Trump had blamed Clinton, again returning to his theme that he was only doing what he could, and that it was somehow Hillary's fault for failing to make him stop ripping off the system.

He blamed her, too, when she pointed out that for all his talk about fair trade, Trump had not only hired undocumented immigrants to build his buildings, he had also built Trump Tower with "dumped" Chinese steel that had come into the country and supplanted the more expensive American-made steel. "Donald has bought Chinese steel and aluminum. In fact, the Trump Hotel right here in Las Vegas was made with Chinese steel. So he goes around with crocodile tears about how terrible it is, but he has given jobs to Chinese steelworkers, not American steelworkers," she said, not only pointing out Trump's use of cheap steel, but also his blatant hypocrisy in doing so.

Trump admitted that he had done so, but blamed Clinton for allowing him to do so. Again. Trump's modus operandi when confronted with an unfair practice that he had engaged in was to blame Hillary Clinton for allowing him to do so, as if she were his mother, and he a little boy who had just pulled the wings off a butterfly. "Why didn't you stop me?" he cried. In other words, "I am not in control of my own actions, and I need someone to prevent me from doing bad things."

And Trump, who is used to grown men crumpling before him, had run out of words that could cover up his staggering level of ignorance on foreign policy and his failure to articulate how the self-proclaimed successful businessman was going to revive an economy and a country that he kept referring to as a failure. "Such a nasty woman," he trolled, thinking it would stop her from speaking.

As he said those four words, if one was really listening, you could hear the last straw breaking on the backs of the millions of women across this country who knew what "nasty woman" was code for. He couldn't call her a bitch on stage. He couldn't use the "c" word. But he said them when he referred to Clinton as "nasty." And women across the country heard every boss, every ex-boyfriend or ex-husband, every father, every mean man on social media who do what they do when they know that you are right and they are wrong. They puff themselves up, try to make themselves big, and they call you a name.

And Hillary nailed him for it: "Donald thinks belittling women makes him bigger. He goes after their dignity, their self-worth, and I don't think there is a woman anywhere who doesn't know what that feels like. So we now know what Donald thinks and what he says and how he acts toward women. That's who Donald is."

As Ezra Klein wrote about her performance: "Hillary Clinton crushed Donald Trump in the most effective series of debate performances in modern political history."

On November 8, every woman who has ever been called a bitch will be at the polls, and they will vote to make sure that the "nasty woman" gets into the White House. And then we'll dance.