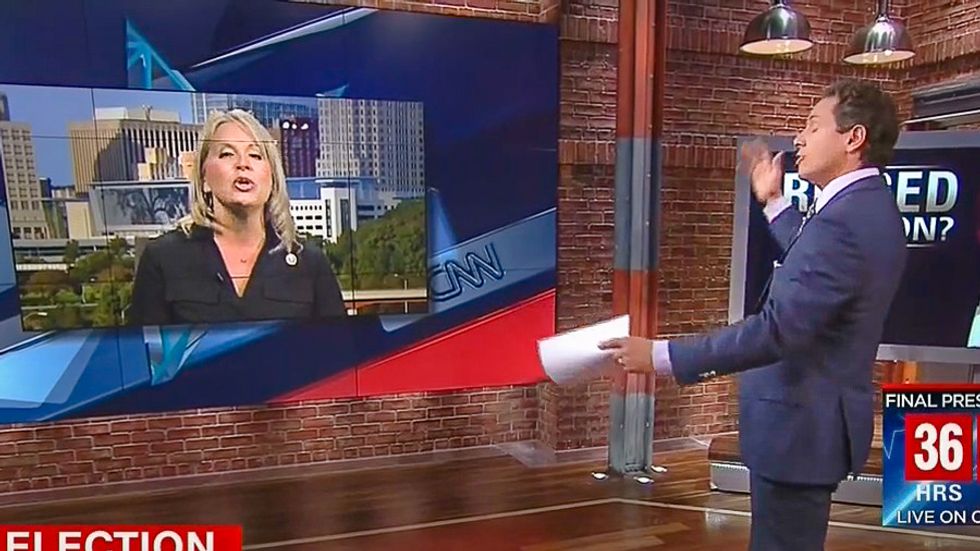 Rep. Renee Ellmers (R-NC), a surrogate for Donald Trump, told CNN host Chris Cuomo on Tuesday that it was "not fair" to make her defend the GOP nominee's claim that U.S. elections were being "rigged" for Democratic nominee Hillary Clinton.

In recent days, Trump has pushed the suggestion that Hillary Clinton will be an illegitimate president if she wins because of "large scale voter fraud," a claim which experts say is not only preposterous, but it also undermines the democratic system.

Ellmers cried foul on Tuesday when Cuomo asked her about Trump's remarks.

"Everything you just said has nothing to do with election fraud," Cuomo pointed out. "There has been a lot of exhaustive research on this. And the idea of widespread fraud in any election, let alone this one, has almost no basis in fact."

"You are focusing on one area, the democratic system," Ellmers complained. "That's not fair! That's really not what Donald Trump is talking about. He has talked about the rigged media against him... We're even finding out that the FBI and the State Department was asking for quid pro quo! He is looking at this from a 30,000-foot level. And he is saying when you add it all up, it does amount to fraud."

"What you are doing is you are taking one piece," the North Carolina Republican replied. "These aren't individual silos, these aren't all in a vacuum, they are all cumulative. And they all add up."

"If you are going to say there's fraud, you have to prove it," Cuomo insisted. "This is very dangerous, otherwise, to undermine the election."

"All I'm talking about is the election fraud," Cuomo shrugged.