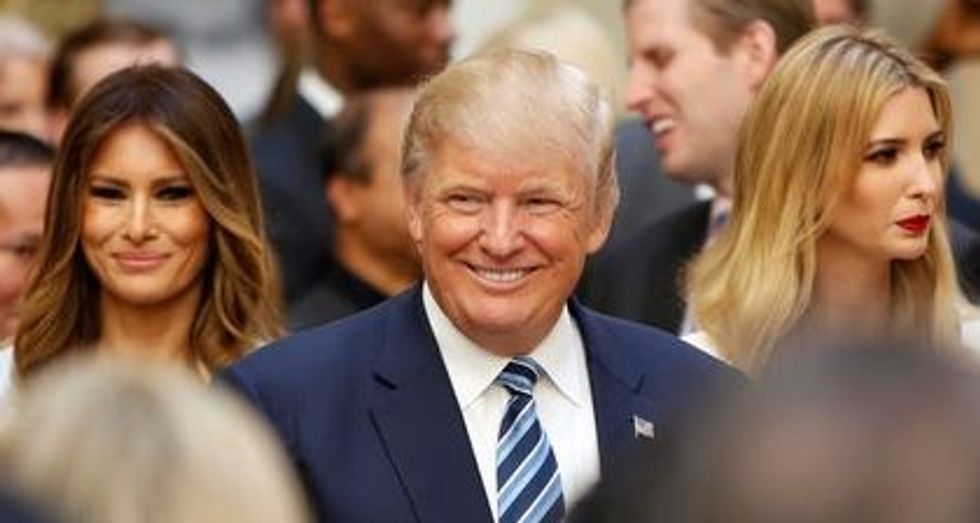 With two weeks to go until the U.S. election, Republican presidential candidate Donald Trump touted his newest hotel venture on Wednesday, citing it as an example of his business success and ability to "get things done" for the American people.

Trump's 11th-hour detour from the campaign trail to plug his business acumen drew criticism from some of his fellow Republicans, but the former reality TV star said the project showed what he could accomplish.

Formally opening the Trump International Hotel in Washington, which has been in business since last month, Trump said he would bring the same principles to running the federal government that he has used as a real estate developer.

"My theme today is five words - under budget and ahead of schedule. That's what we do," Trump said at a ceremony in a hotel ballroom.

"This is what I want to do for our country," he said. "A project like this demonstrates what is possible when a team works together for a totally common purpose. It also shows how to work with government and to get things done."

Trump, who is making his first run for elected office, often highlights his business accomplishments and has held numerous events at his properties since launching his White House bid in June last year, including a trip to Scotland to open a refurbished golf resort in June this year.

But his Democratic rival in the Nov. 8 election, Hillary Clinton, and other critics have pointed to Trump's many business failures and bankruptcies in his long business career.

Trump trails Clinton in opinion polls. From Washington, he was headed for campaign events in North Carolina, one of the key states that could determine who wins the White House. On Thursday, he heads to Ohio, another battleground state.

At the ceremony, Trump said that after a successful business career he wanted to "give back" and embark on a national plan of revitalization for poor communities and ailing infrastructure.

"The American people know what this election is about and they see it every time they get their healthcare bills in the mailbox or ride down a highway that's broken or go to an airport that looks like it's from a third-world country," he said.

The break from the campaign trail for a business event was unusual for a presidential candidate so close to the election. Trump campaign manager Kellyanne Conway said in several television interviews that the Washington event would not take away focus from the campaign and was "a quick pit stop."

Asked after the event why he was in Washington instead of campaigning in a battleground state, Trump told CNN it was "a very rude question" and he worked hard on the trail every day.

But Republican strategist Steve Schmidt, who led 2008 Republican presidential nominee John McCain's campaign, said the hotel stop was the latest inexplicable act from Trump and was atypical behavior for someone trying to win the White House.

"The walls are collapsing," Schmidt told MSNBC in an interview. "He is not doing any of the normal activities that you'd be doing 13 days out in a presidential race for somebody who's competitive. You don't take a time-out to tend to your business interests."

BRAND 'HOTTER THAN EVER'

Newt Gingrich, a former speaker of the U.S. House of Representatives and one of the few prominent Republicans who has continued to actively back Trump's tumultuous campaign, said Trump's appearance hit the right message.

"I think it's a good campaign event because it emphasizes under budget and ahead of schedule, and why a Trump government would be different from the bureaucratic wasteful slow system we have today," Gingrich told reporters.

Trump's 263-room luxury hotel in Washington's Old Post Office building, about a mile from the White House, has not escaped controversy during preparations for its launch.

Trump has sued celebrity chefs Jose Andres and Geoffrey Zakarian for backing out of plans to run a restaurant there amid Trump's harsh rhetoric towards Hispanics.  Critics have also organized protests out front. Earlier this month, the hotel's facade was sprayed with graffiti, NBC News reported.

One of Trump's sons, Eric Trump, said the Trump brand was "hotter than ever before" but that his father put his presidential campaign before his business interests. "Even if there was a price associated with it, I think he was willing to pay that price, because it's just that important," he told Fox News.

On Tuesday, Trump stopped at his Doral National Golf Club in Florida as part of a campaign swing through the state, denouncing President Barack Obama's signature healthcare overhaul because of rising insurance premiums.

Clinton campaigned on Wednesday in Florida, where many public opinion polls show a tight race. An average of polls compiled by RealClearPolitics showed the two candidates close in Florida, with Clinton at 46.4 percent compared to 44.8 percent for Trump in a race including third-party candidates.

Speaking at a rally in Lake Worth, Florida, she slammed what she described as Trump's business practices.

"Today he's in Washington DC to open a new luxury hotel," she said to boos from the crowd. "While the hotel may be new, it's the same old story because once again ... he relied on undocumented workers to make his project cheaper. And most of the products in the rooms were made overseas. And he even sued to get his taxes lowered."

With the campaigns focused on battleground states, Clinton has a strong lead in the race to secure the 270 Electoral College votes - or tally of wins from the states - needed to win the White House, according to results from Reuters/Ipsos States of the Nation project released on Saturday.