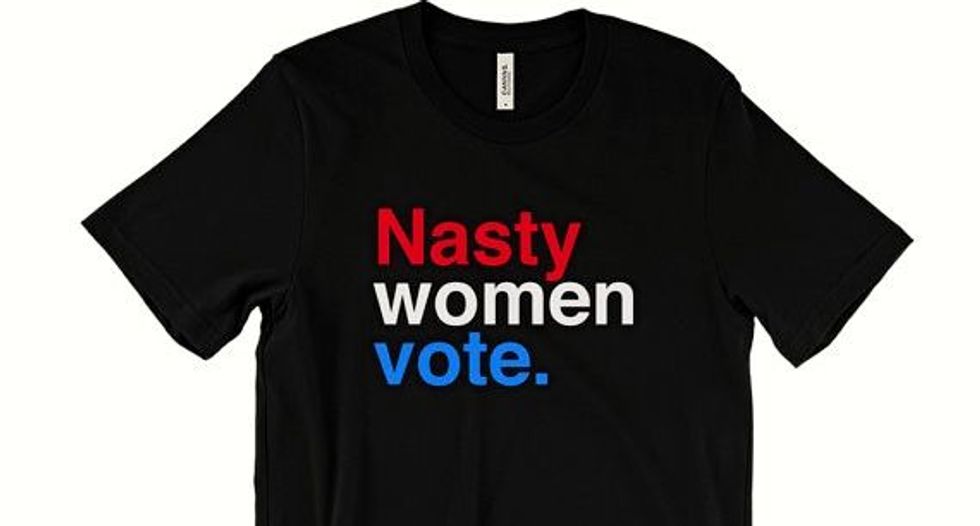 Sellers said on Thursday that demand came swiftly and was unrivaled minutes after the final debate ended.

"I have had nonstop orders since last night," Pennsylvania part-time graphic designer Naheed Snyder said of her T-shirt, designed simply with the words "Nasty women vote," selling on Etsy. "It's unbelievable how well this one has done... there's no comparison."

Merchandise retailers typically see a profit boost during election season as voters on both sides seek to wear support for their candidates, particularly around conventions, voting and this year, debates.

Traffic to Teespring.com, a website that allows users to create, sell and buy personalized T-shirts, spiked 40 percent during the second presidential debate and 120 percent in the third debate, the company said.

Merchandise promoting the Republican candidate was steadily higher earlier in the race, said Maheesh Jain, co-founder of online customizable merchandise retailer CafePress. Some of the most popular items included the slogans "I am a deplorable" and "Hillary for prison."

At a fundraiser in September, Clinton said Trump had given voice to hateful rhetoric through his behavior as a candidate, and that "you can put half of Trump’s supporters into what I call the 'basket of deplorables.'" The following day she said she regretted saying "half" and that she had been "grossly generalistic."

In the last two weeks, after the release of Trump's 2005 lewd remarks toward women and an onslaught of women accusing him of sexual harassment or assault, the items have declined in popularity, Jain said. Trump has apologized for the remarks and denied the accusations.

After the third and final presidential debate on Wednesday, Trump's "nasty woman" comment gave life to a new merchandise line aimed at assailing him.

"If Hillary Clinton is a nasty woman for being most likely our next president, maybe that's not such a bad thing," said Amanda Brinkman, who runs the online feminist-centered accessory shop Google Ghost. "Maybe that's something you should wear as a badge of honor."

Brinkman's "Nasty Woman" T-shirt, featuring the phrase with a heart around it, sold more than 6,000 times since she designed and posted it during Wednesday's debate. The second most-popular item in her store's history, a pen, at its peak garnered 25 sales in a single day.

Brinkman, from New Orleans, said she is donating half of the proceeds to reproductive healthcare provider Planned Parenthood, which Trump opposes because it offers abortions.

"I thought it only made sense to use his own words to sell a product that would then benefit Planned Parenthood," Brinkman said.

In past elections, Jain said, her company had seen a direct link between the most merchandise sold and the candidate that won the election.

"Typically, whoever is winning in the sales column will win the election," Jain said. "Right now, we're seeing Clinton winning the election."