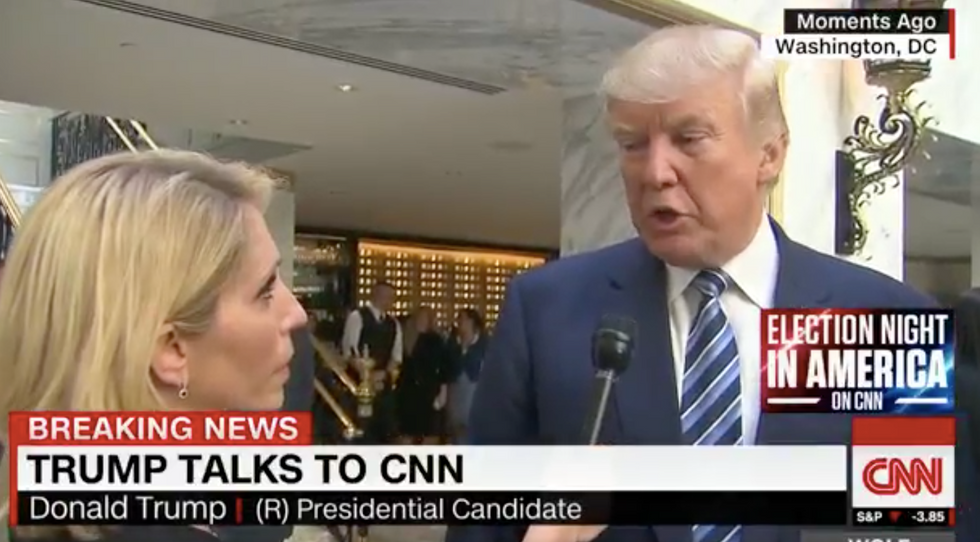 On Wednesday, failing Republican presidential candidate Donald Trump took a break from the campaign trail to hold a press event at his new Grand International Hotel in Washington.

Even though campaign staff said the event was not an official campaign stop, Trump used the stage to gripe about government spending on military hospitals, attack the Affordable Care Act and cast aspersions at Megyn Kelly after her tense interview with campaign surrogate Newt Gingrich on Tuesday night.

CNN's Dana Bash caught up with Trump at the Grand International in D.C. and peppered him with questions about the oddly-timed event, which comes in the middle of a make-or-break week for the campaign.

"There's new audio tape of you talking about the fact that you really have relied on your popularity and the fact that people come to your events, and that helps you with free advertising," Bash said. "Is that what this is about?"

"And so to people who say you're taking time out of swing states to go do this, you say...?" Bash prompted.

"I say the following: You have been covering me for the last...long time. I did yesterday three stops and eight speeches and I've been doing this for weeks straight," Trump said. "For you to ask me that question is actually very insulting because Hillary Clinton does one stop and then she goes home and sleeps. And yet you'll ask me that question, I think it's a very rude question."

The Grand International in Washington is the last Trump hotel that will bear his name. Last week Trump Hotels International CEO Eric Danzinger announced that from now on, all new Trump hotels will be called Scion Hotels.

Brand experts say that Trump's name has become associated inextricably to the ugliness of his presidential campaign. Rooms at the Grand International have been selling slowly since the hotel's soft opening earlier this year. By the second day of business, rates were being slashed to attract travelers while room rates at comparable hotels nearby remained steady.