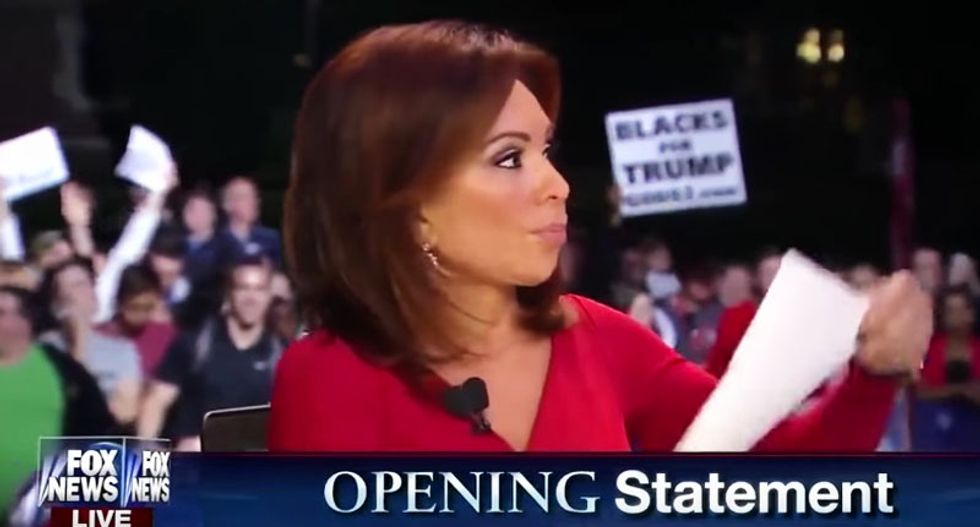 Judge Jeanine Pirro has continuously been an outspoken supporter of GOP nominee Donald Trump. She's also had a lot of harsh words for his Democratic counterpart, Hillary Clinton.

During the opening statement of her Saturday night show, however, Pirro got a little lost in her words when her teleprompter cut out and she was left to improvisation, which resulted in a lot of dead air.

Pirro started her statement discussing the latest Trump tapes that reveal him bragging about sexually assaulting women. She said, "The comments are shameful and cringeworthy. The words are disgusting, devastating, and embarrassing."

"But," she adds, "guess what — I still, without a doubt, support Donald Trump." Pirro then attempts to rip into Clinton before her teleprompter leaves her speechless.

Given that Pirro is someone who has fervently put her support behind The Donald and has had plenty to say about Clinton over the last year, her teleprompter cutting out was the perfect moment for anyone who has ever cringed while listening to Pirro speak.

She started on her Clinton rant with, "Hillary's actions have put our national security and our safety in jeopardy. Her State Department policy and decisions have created a vacuum where," she begins to stumble on her words before trying to make a recovery with a classic right-wing buzzword, "Benghazi."

"The men in Benghazi were killed because of her refusal to take care of those who were working for the State Department," Pirro finishes before rushing to find a paper copy of her statement in an attempt to recover from her on-air blunder.

For someone who always has something to say, it was too perfect seeing Pirro trip up on her words, even if just for a moment.

After a series of technical difficulties as the segment kicked off, the former New York judge dropped the opening altogether and said, "You know, folks, we're having a lot of trouble tonight so I'm gonna go to my first guest."

You can watch the full clip below.