WATCH: Obama knocks Trump: 'If it's rigged, boy, it would be a really big conspiracy' 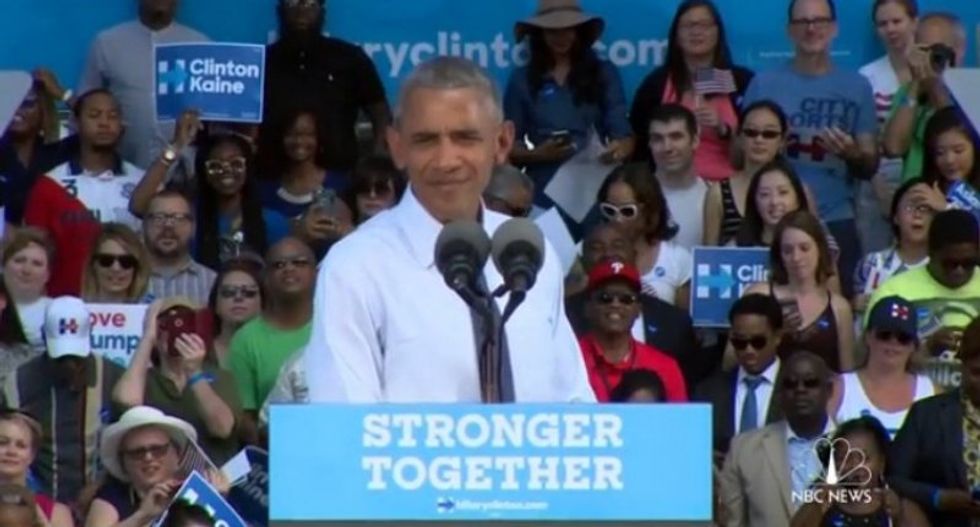 President Barack Obama is in Las Vegas, Nevada Sunday at a rally for Hillary Clinton.

Obama made a lot of news in Ohio for his attacks on Trump, and he did the same this time as well.

As Boyz II Men was warming up the audience for Obama singing "Motownphilly," Obama appeared on a small stage outside the rally site where the overflow crowd was. According to pool reports from Julie Hirschfeld Davis

at the New York Times, Obama was in front of a Jumbotron, standing in front of a few hundred people behind security fences. Obama told the crowd he was sorry that they had to be outside.

"But I just wanted to let you guys know how much I appreciate you," he said, continuing that he would never have been elected if it wasn't for their work. "But if we're going to continue all the progress that we made, then we are going to have to make sure that we vote this time!"

He went on to encourage the crowd to not just go to the polls but to take friends, neighbors and cousins too. "If you care about putting people back to work, then you want Hillary Clinton as president of the United States. If you want to make sure that immigration reform gets passed, we've got to have Catherine Cortez Masto in the United States Senate. If you want to make sure that we continue to make progress on education and making college affordable, then we've got to have more Democratic members of Congress."

Finally, he told the outside audience that they already know the stakes. "We can't afford the other guy. Can't do that! Can't do that! I'd feel really bad. You know, this is not joke."

Obama not only campaigned for Clinton, he also spoke out for Catherine Cortez Masto, running to replace Sen. Harry Reid (D-NV) against Rep. Joe Heck (R-NV). "A vote for them is a vote for more gridlock, that's their argument. That's not a good argument," Obama said as the audience shouted "no!"

"On issue after issue, Catherine Cortez Masto is going to be on your side working for you," Obama continued. "Her opponent is going to have the Koch Brothers on line one and Donald Trump on line two. When Donald creates his TV station, I'm sure, Joe Heck will be up on there giving interviews. Even after rescinding his endorsement of Trump. He said, 'I want to support him. I really do.' Really? So, how does that work? You're for him, but you're not for him. But you're kinda for him. What the heck?!"

When addressing Trump's accusations that the system is rigged and the election will be rigged, Obama noted that all of the swing states are headed by Republicans, who are counting the vote. "If it's rigged, boy, it would be a really big conspiracy," he declared. "And that Republican governor is not going to rig an election for Hillary Clinton."

He closed by asking the audience to give him and "Michelle a good send off," by voting early, knocking doors and making calls. "We'll show our kids that we are still the greatest nation on Earth and we're just going to keep on getting better because of you!"