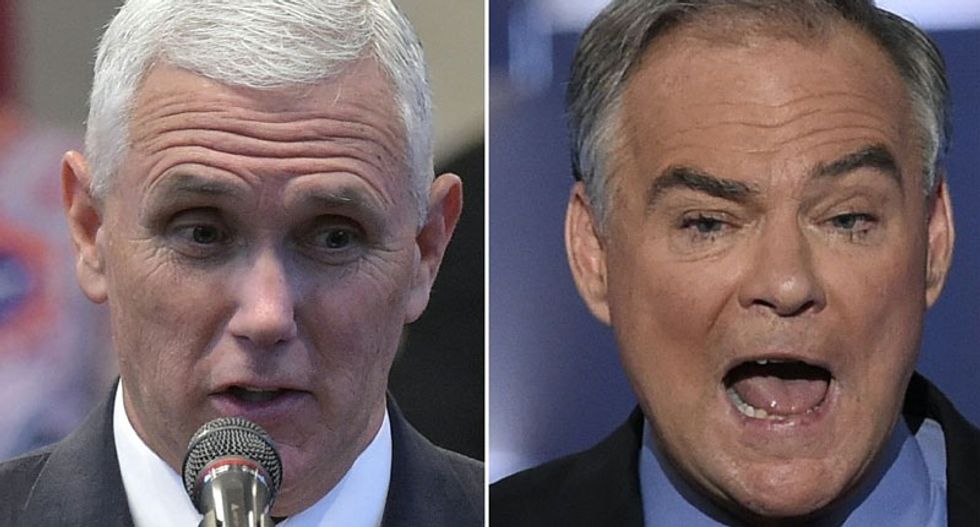 After a dramatic week of beauty queens, sex tape allegations and tax leaks, the upcoming US vice presidential debate could feel like a throwback to simpler times.

Both VP picks have said their respective running mates Hillary Clinton and Donald Trump set a high bar in the first of three presidential debates, which drew a record 84 million viewers.

A showdown between two middle-aged white men that some Twitter users predict will be akin to "watching paint dry," the goal of this debate is to go easy on the zingers and woo undecided voters.

"Given the polarizing nature of the two major-party nominees and the incredible attention paid to each of them, the vice presidential debate in 2016 may be even more of a sideshow than it normally is," said Geoffrey Skelley of the University of Virginia Center for Politics.

Easily overshadowed by experienced diplomat Clinton and bombastic real estate mogul Trump, the vice-presidential candidates remain important considering that either could be commander-in-chief should the future president die or resign.

Nine of the 44 US presidents became the nation's leader by succession.

Clinton is approaching 69 and Trump is 70 -- among the oldest people ever to run for the presidency -- and the health of the White House hopefuls has been a top theme of the campaign.

Kaine and Pence also have the chance to compensate for the excesses and weak spots of their running mates.

As Trump wraps a week of campaign bombshells -- including his abusive comments about a Venezuelan-born beauty queen -- "Pence may try to provide a more respectable face for the Republican ticket," said Joel Goldstein, a constitutional law professor at St Louis University.

Democrat Kaine will "certainly present himself and Clinton as policy-oriented people committed to helping the less fortunate and the middle class," Goldstein said.

Both considered safe picks, Kaine and Pence will wield their nice-guy, workmanlike demeanors to entice voters turned off by the circus-like atmosphere of the campaign.

Clinton said she chose senator Kaine because she wanted someone with enough experience to "literally get up one day and be the president of the United States."

"He has never lost an election," she said of the folksy but experienced foreign policy hand from the battleground state of Virginia.

When he introduced Pence as his running-mate, billionaire Trump called the Indiana governor a "solid" man and a unifying figure.

The 57-year-old conservative evangelical Christian and former congressman could take on the seemingly herculean task of reassuring voters alarmed by Trump's incendiary rhetoric.

"Since so few visible Republicans are supporting Mr. Trump with any enthusiasm, Governor Pence has served as an important surrogate for Trump," Goldstein said.

A Gallup analysis done before Joe Biden and Paul Ryan squared off in 2012 showed that vice-presidential debates rarely have much impact.

Even after the 2008 debate that pitted Biden and the high-wattage Sarah Palin against each other -- drawing nearly 70 million viewers -- voter preference remained relatively unchanged.