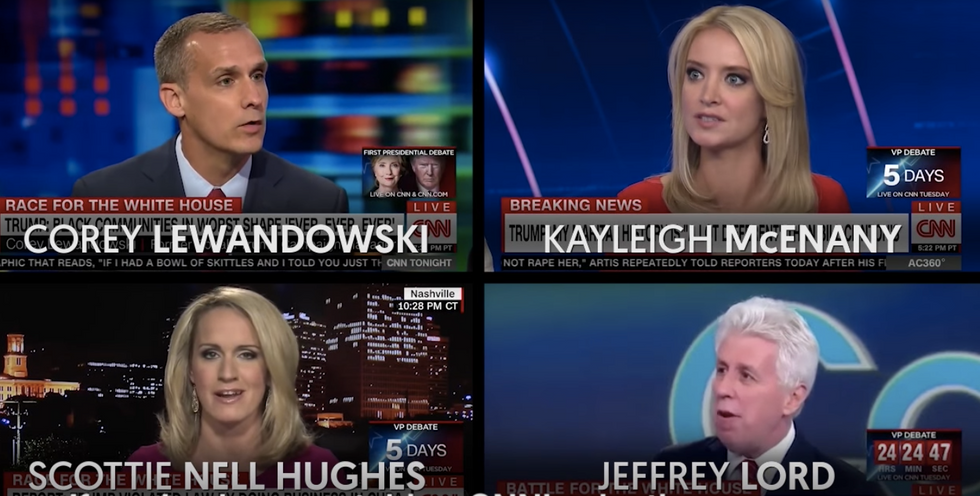 Lewandowski, Hughes, McEnany and Lord, the Four Spokeshorses of the Apocalypes (Screen capture)

In a video titled "CNN has a Trump surrogate problem," Carlos Maza of Media Matters hilariously torched the "professional bullshit artists" shilling for the Trump campaign on CNN, but made an important point about journalistic integrity in the process.

The quartet of dunderheads -- Corey Lewandowski, Kayleigh McEnany, Scottie Nell Hughes and Jeffrey Lord -- can be found sitting alongside ordinary, learned people of both parties on CNN virtually every day. The gamely go about their duty of defending whatever heinous, embarrassing thing Donald Trump has said or done in the last 24 hours and talking utter garbage as if it were the most normal thing in the world.

"At first glance, this seems harmless enough," Maza said. "Need to show both sides, fair and balanced, yadda yadda yadda, we get it."

"But these aren't normal political commentators," he continued. "They are professional bullshit artists. They argue in circles, they change the subject" and use any tactic they can to "bring the segment to a screeching, unwatchable halt."

In the end, Maza said, the commentators set up to argue against these appalling liars are all either "tearing out their hair" or "just kind of blankly staring at the camera" in numb, shocked horror and disbelief.

Lewandowski, he said, has appeared as a "political commentator" on CNN while pulling down paychecks from CNN and Donald Trump simultaneously, blatantly, out in the open, and yet nobody seems to find this unusual in the slightest.

At the Media Matters website, Maza has details of the non-disparagement agreement Lewandowski signed as part of his contract with Trump that forbids him from saying anything negative about Donald Trump on the air even if he wants to.

But don't be mad at these four sad, morally bankrupt wind-socks who will defend any and every contemptible thing their candidate does, Maza said, "Be mad at CNN," because what's happening underneath all of this is that people are being "desensitized to bullshit."

"It sets a dangerous precedent for all of us," he said.