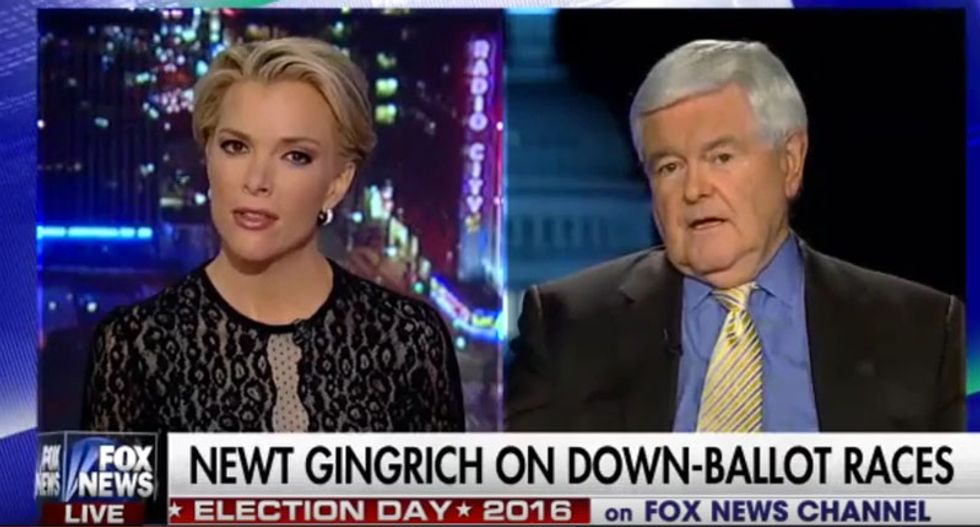 Former House Speaker -- and current Trump supporter -- Newt Gingrich flew off the handle Tuesday night after Fox News host Megyn Kelly reminded him that he is backing a "sexual predator."

During the combative 7-minute interview, Kelly kept pointing out that Trump is losing badly in the polls -- with a terse Gingrich batting away the numbers and sarcastically suggesting that maybe they should all "just go home."

After the conservative broadcaster brought up the sexual assault allegations against Trump, Gingrich blew up.

"If Trump is a sexual predator," Kelly started to say.

"Okay. That is your opinion," Kelly said.

"You could not defend that statement. I’m sick and tired of people like you using language that’s inflammatory that’s not true!" Gingrich blurted.

"Excuse me, Mr. Speaker, you have no idea whether it's true or not," Kelly said.

"When you used the word you took a position and I think it's very unfair of you to do that, Megyn. I think that is exactly the bias people are upset by," Gingrich replied.

A nonplussed Kelly responded, “Your defensiveness on this may speak volumes.”

Kelly added: "What I said is if Trump is a sexual predator, then it's a big story. And what we saw on that tape was Trump himself saying that he likes to grab women by the genitals and kiss them against their will. That is what we saw. And then we saw ten women come forward after he denied actually doing it at a debate to say that was untrue, he did it to me, he did it to me, we saw reporters, we saw people who worked with him. People from Apprentice and so on and so forth. He denies it all. Which is his right. We don't know what the truth is. My point to you is as a media story, we don't get to say the ten women are lying. We have to cover that story."

"You wanna go back through the tapes of your show recently?" Gingrich snapped at Kelly. "You are fascinated with sex and you don’t care about public policy! That’s what I get out of watching you tonight!”