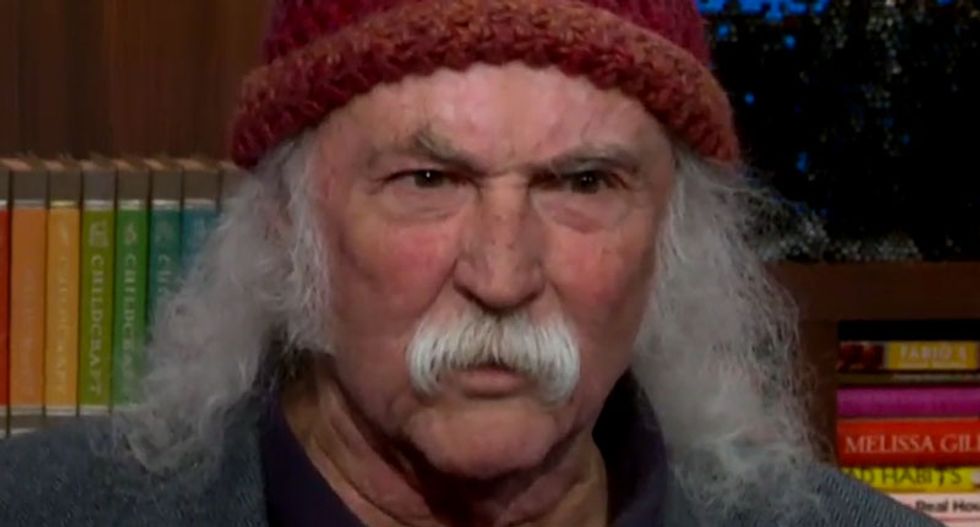 Rock & Roll Hall of Fame member David Crosby rose to Watch What Happens Live host Andy Cohen's bait Wednesday, when he shared his evaluation  of musicians Kanye West, Jim Morrison, Lady Gaga, Katy Perry, and Taylor Swift. He also offered that one of the reasons Bob Dylan had failed to acknowledge his recent naming as Nobel Prize Laureate was not due to arrogance, but rather, because "Bob doesn't have a cell phone and he hasn't checked his mail yet."

Crosby, long known for letting his freak flag fly, spoke candidly of West, the rapper who has been described by critics as a genius when not being written about as an extension of the Kardashian household.  Crosby suggested that West might need to meet some "real" rock musicians.

After saying that Kanye West could "neither write nor sing nor play," Crosby elaborated. "The thing that really bugs me is the 'I'm the world's greatest ROCK STAR!' Someone should drive him over to Stevie Wonder's house, RIGHT NOW, so he can see what a 'real one' is," he told Cohen. He then suggested that West should learn how to sing by listening to Ray Charles "entire catalogue."

Andy Cohen asked Crosby a series of questions about musicians in an effort to get Crosby to throw the shade that his Twitter personality has made him famous for. While he joked about Dylan, Crosby said that the new Nobel Laureate is "too smart a guy" to ignore what was going on, and that he anticipated a response soon. But he didn't hold back when Cohen asked him about fellow Hall members, The Doors' frontman Jim Morrison.

"Billboard wrote that you disliked Jim Morrison of The Doors: why is that?" Cohen asked. "How specific do you want me to get?"

Crosby initially avers, before plunging in, "I think he was a poser."

"I don't think he was a good poet," Crosby said. "And I think he spent entirely too much time being dramatic. I didn't like that band, though, which kind of shaded onto him because they never had a bass player. So they never swung. That band never swung. Ever."

Cohen asked, "Did you seem him around, Morrison?"

Crosby lit up, and grew gleeful at the story he was about to tell. "Oh boy," he began. "Oh boy. One time when I had become psychedelically enhanced, and I was in the Whiskey-a-Go-Go -- a highly inappropriate place to be that way, by the way -- and he walked up to me and snatched my shades off my face and said, 'You can't hide,' and I teleported -- I teleported, I had never done that before -- I teleported to the other side of the room. And I don't know how the hell I did that. That is amazing."

The songwriter who is in the Songwriters Hall of Fame for work he did with both The Byrds and CSN, had high praise for Lady Gaga while acknowledging that he doesn't know who either Taylor Swift or Katy Perry are.

Former Minneapolis Police officer Derek Chauvin was found guilty on all charges by a jury in Minnesota for the killing of George Floyd last year.

The jury's verdict comes less than one year after video showing Chauvin kneeling on the back of Floyd's neck for more than nine minutes sparked nationwide outrage and led to mass protests against police brutality throughout the United States.