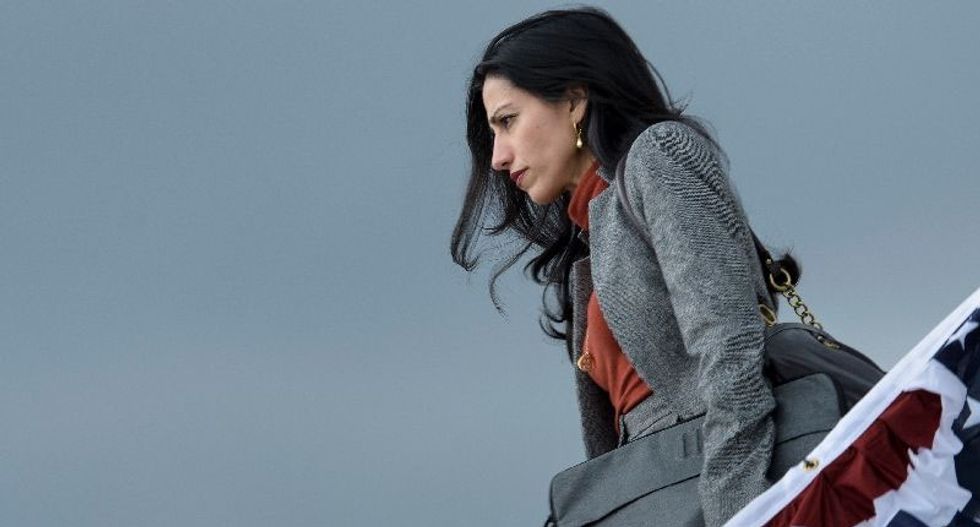 Huma Abedin does not like the spotlight. But the elegant senior adviser to Hillary Clinton has not always been able to steer clear of high-profile messes, such as her husband's sexting and a new Clinton email row.

FBI director James Comey announced Friday that his agents are investigating a new bunch of emails, renewing an inquiry that the campaign thought had ended in July.

In fact, the State Department found some emails from her on husband Anthony Weiner's laptop. They separated in August after it emerged that the former lawmaker was facing a new round of sexting allegations.

Abedin, 40, is the vice chairwoman of Clinton's campaign. The two women have worked side by side for 20 years.

Hillary Clinton has often said that if she had a second daughter, it would be Huma, calling her smart, discreet and effective. Their relationship dates back to when Clinton was first lady.

Since the bombshell announcement of a renewed investigation Friday -- just 11 days before the presidential election -- Huma Abedin has kept a low profile.

But Clinton's team of close advisers has leapt to Abedin's defense.

- Intern at the White House -

"Huma's been completely cooperative with the authorities. She complied to the best of her ability turned everything over that she had in her possession," campaign chief John Podesta said on CNN.

Born in Michigan to educator parents from India and Pakistan, Abedin spent her childhood in Saudi Arabia before returning to the United States to attend graduate school.

She arrived as an intern at the White House in 1996 and was assigned to Office of the First Lady.

She followed Clinton when Hillary became senator from New York in 2001 and became her chief of staff. She was her personal assistant when Clinton launched her failed 2008 presidential bid.

When Clinton became secretary of state in 2009, Huma Abedin became her Chief of Staff-Assistant. Under a special arrangement, Abedin was allowed to work as a consultant for Teneo, a consulting business related to the Clinton Foundation, while also working for the foundation.

In July 2010, she wed Anthony Weiner, a Democratic congressman from New York. Bill Clinton officiated at their wedding. The couple has a son, Jason, was born in December 2011.

Ultimately Weiner resigned the post in May 2011, after acknowledging that he sent pictures of himself in underwear to women on Twitter.

In May 2013, he plotted a political comeback, announcing his candidacy for New York mayor.

Huma, in a documentary on his failed campaign, says she loves her husband and has forgiven him. After that followed more sexting allegations and Huma's separation and departure for the Clinton campaign.

"The nature of our relationship has changed," Abedin recently told Vogue Magazine describing her enduring ties with Clinton.

The two women travel together most of the time. Huma is never far from Hillary.

"With Huma, her grace, her intellect and her humility have been unmatched as I've watched her go from an aide to an adviser to one of the people at the top of my campaign," the candidate raved.

In October 2015, Abedin testified before a congressional committee on the September 2012 attack in Benghazi

She also was questioned by the FBI last May, in the investigation of the private server Clinton used as Secretary of State.

In a Hillary Clinton administration, many expect that Abedin would be a top contender for the key position of White House chief of staff.