‘All in good time’: Kellyanne Conway refuses to rule out special prosecutor for Hillary Clinton 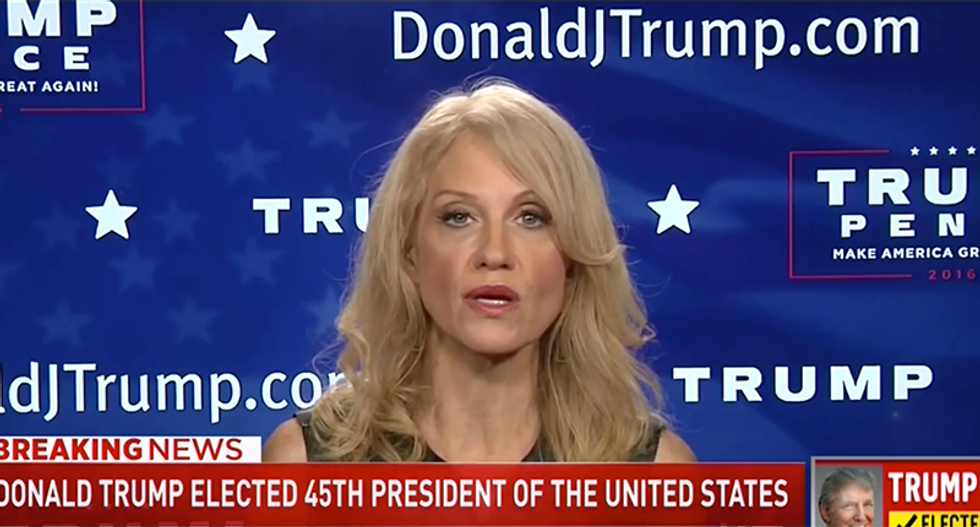 While President-elect Donald Trump had a "good conversation" with Hillary Clinton in the early hours of Wednesday morning, Kellyanne Conway isn't sure what the future holds for a prosecution.

"He had a very gracious, very warm conversation with Secretary Clinton," Conway said of the concession conversation. "It lasted about a minute."

She said that they complimented each other on the hard-fought race. Trump told Clinton she was "tough and smart" and Clinton congratulated him on the victory.

The panel wanted to know more about how Trump plans to proceed with Clinton, however. During the debates, Trump said that Clinton should be jailed, and his crowds regularly chant “lock her up” at his rallies. When asked if Trump intends to appoint a special prosecutor for Clinton, Conway wasn't sure.

"We did not discuss that last night since his victory and he didn't address it with Mrs. Clinton on the phone," she said.

Joe Scarborough remarked that Trump said that he would on the national debate stage. But Conway deflected.

"I would need to discuss that with him," she explained. "I think you heard his own words last night to the extent that one man can as president and Vice President [Mike] Pence, who is phenomenal, they're looking to unify the country. We haven't discussed that in recent days. I think that it's all in good time. We also -- I think that Donald Trump proved too that even amidst a corrupt and rigged system where people are forgotten and don't feel like they can get a fair shot, they can rise up on Election Day and express their voice."