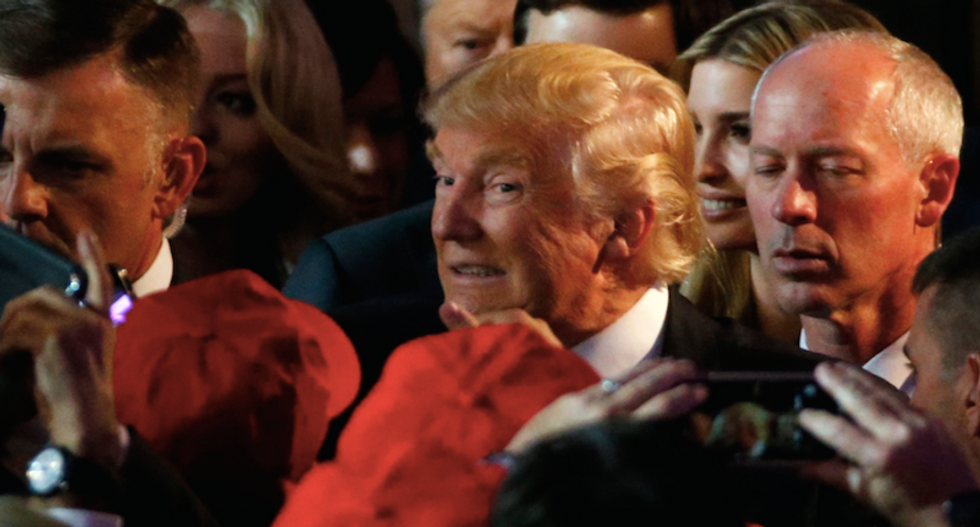 U.S. President-elect Donald Trump has often boasted about the strict confidentiality pledges he exacts from his employees.

Now a legal challenge to one of those agreements is pending before a U.S. agency over which he will soon have influence, potentially posing an early test of concerns about conflicts of interest between Trump's public role and his business empire.

In September, a worker-advocacy group filed a charge with the National Labor Relations Board (NLRB) claiming a nondisclosure contract used by Trump is unlawfully broad. The contract prohibits employees, independent contractors and even volunteers from ever disclosing any information that Trump deems confidential about his personal, business or political life.

The NLRB has said that sweeping or unclear contracts inhibit workers from discussing working conditions or speaking to union organizers.

The five-member NLRB currently has two vacancies that Trump is slated to fill early in his term, likely tipping what has been a liberal-leaning agency under President Barack Obama to a more business-friendly posture. If the NLRB rules against Trump, it could free up workers to be more vocal about their concerns and strengthen their bargaining power.

In addition to the confidentiality case, there are about 10 other Trump-related cases pending at the NLRB. The cases involve alleged labor violations at the Trump International Hotel Las Vegas, where management has refused to bargain with the Culinary Workers Union.

It was not clear if the confidentiality contract was intended for workers on Trump's election campaign or employees in his businesses, and Reuters could not independently verify its authenticity. Representatives of the Trump Organization did not respond to requests for comment.

The case is at a very early stage and could be settled or dismissed before reaching a full hearing before the five-member NLRB. The board's decisions may be appealed in a federal court.

The NLRB is comprised of three members from the sitting president’s party and two from the opposing party, a system that typically results in wide policy shifts between administrations. In addition to the current two vacancies, another will arise when a current member's term expires next December.

Under the Obama administration, the NLRB has struck down confidentiality agreements and other employment contracts that could discourage workers from organizing at T-Mobile USA Inc, Quicken Loans, DirectTV and a number of other companies.

Government ethics experts and labor lawyers said that if Trump's handpicked NLRB members uphold the contract, it could suggest favoritism.

“There is an appearance of bias and political pressure that could undermine the legitimacy of the agency," said Richard Painter, a professor at the University of Minnesota Law School who was the chief White House ethics lawyer under Republican President George W. Bush.

The NLRB cases represent one of several areas where concerns may arise over potential conflicts of interest raised by Trump’s new role and his sprawling business interests. Trump last week said he would allow his children to run his businesses while maintaining his ownership interest via a "blind trust."

If the current cases are ruled upon by the NLRB, one possible solution to the potential conflict could be for Trump appointees to recuse themselves from cases involving his business organization, said a former NLRB chairman, William Gould.

Gould said that during his tenure at the agency, in the mid-1990s, members recused themselves from cases that raised any chance of a conflict. Gould, who is now a professor at Stanford Law School, said he disqualified himself from cases involving a union of which his son was a member.

Several experts, however, said recusal would not be legally required unless Trump's appointees represented him or his companies in the past or were otherwise involved in his business.

The challenge to Trump's confidentiality agreement was filed by David Rosenfeld, a California labor lawyer, on behalf of the Committee to Preserve the Religious Right to Organize, a worker advocacy group that he created.

Reuters reviewed a copy of the employment agreement that Rosenfeld filed with his complaint, which targeted both the Trump Organization and the Trump campaign. Rosenfeld said he copied it from the campaign website, but that the agreement was no longer posted there.

It was not clear how many employees signed this version of the agreement, and Reuters was unable to find a copy on the website.

The agreement prohibits disclosure of details about Trump's "personal life, political affairs and/or business affairs," as well as anything “Mr. Trump insists remain private or confidential.” It forbids employees from publicly disparaging Trump and his wife, children, grandchildren, siblings and other relatives.

Confidentiality agreements are common, but labor law experts said they can be unlawful if they are too broad or don't specify what types of information will be deemed confidential.

Trump defended a similar confidentiality agreement in a case earlier this year involving a former campaign aide, whom Trump accused of giving information about other staffers to reporters.

In a statement, the Trump campaign said confidentiality agreements were "standard practice" for entities that need to safeguard sensitive information. The case settled for undisclosed terms.