'Do I have a double chin in this one?': Internet mocks ‘working hard with Trump’ PR stunt photo 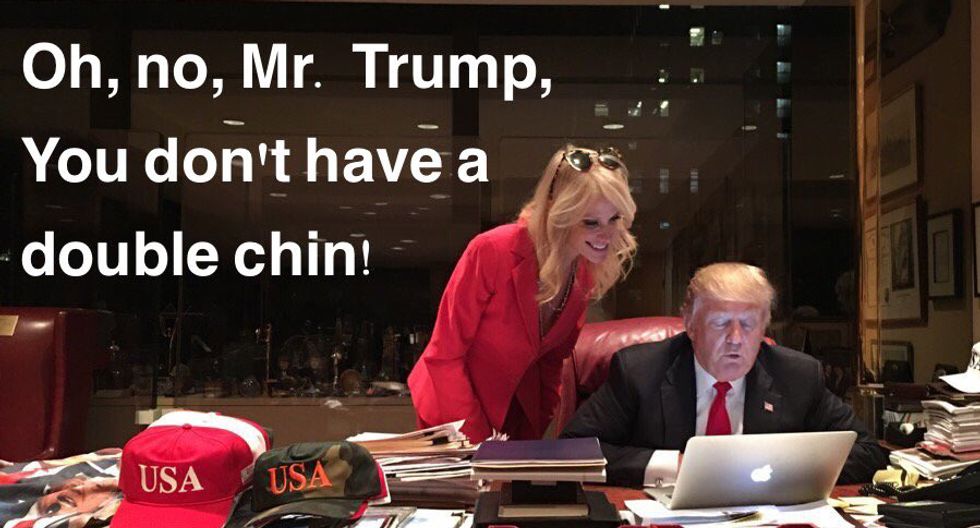 Pushing back on reports that Donald Trump is “furious” over her public airing of grievances against rumored Secretary of State pick Mitt Romney, Kellyanne Conway Monday tweeted a photo of herself and the president-elect sitting at a computer, insisting the pair are “working hard tonight.”

@realDonaldTrump & I working hard tonight. Thank you for the privilege of a lifetime, #PEOTUS. https://t.co/tBcg8duiVj
— Kellyanne Conway (@Kellyanne Conway) 1480379867.0

Pushing back against her pushback, Twitter users imagined the likely conversations between Trump and Conway. Some assumed Conway was helping Trump get the hang of the whole computer thing.

Others thought she was helping the president-elect get the hang of words in general.

And in light of a recent report claiming Trump railed against media execs for publishing an unflattering photo of him, one user insisted Conway was helping Trump find a more attractive picture to send to news networks.

Another suggested the pair were engaged in a more general search.

And, as Twitter users are want to do, some people were just plain sassy.