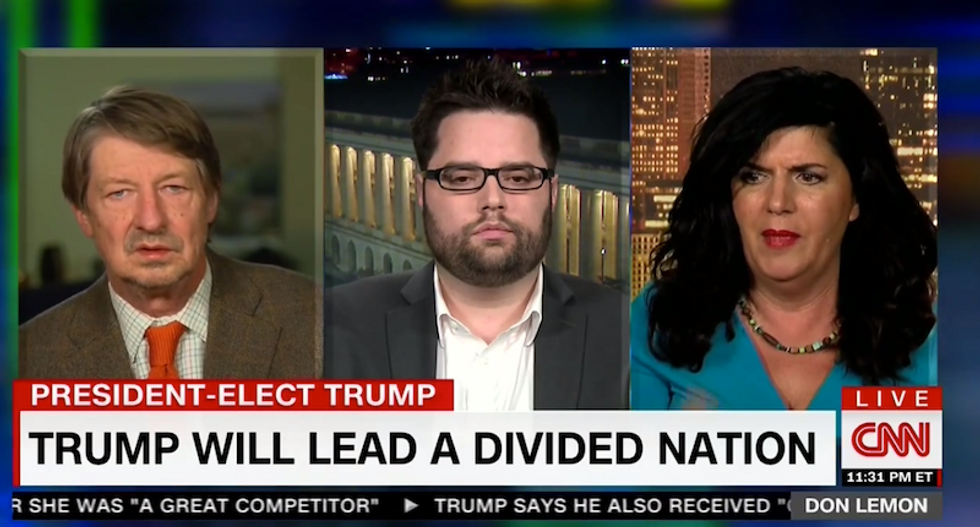 Panelists on CNN joined Don Lemon on Friday night to discuss what may have led so much of the country to vote for Donald Trump on Tuesday — something that pundits, analysts, and journalists are trying to wrap their heads around.

As many in recent days have discussed the bubble of rural America, panelists were keen to wonder about the issue of who in the United States is really living in a bubble. Roll Call writer Patrick Thornton explained an article he wrote about being from the midwest and moving to a coast. His take? The bubble is rural America.

"A lot of people are saying that it's the people on the coast, they need to get out of their bubbles and they need to see more of America to understand why people voted for Donald Trump," he explains. "The county I come from is 97 percent white."

Thornton continued, "There are many people who live in a white bubble that don't know anybody other than themselves."

CNN contributor Salena Zito had a different idea. She believes that people on the coast are the ones living in the bubble. She took issue with Thornton suggesting that "People in the middle of the country, don't get out and they're the ones that live in the bubble."

She continued, "They understand elites. It's on their television, it's in their advertising. They go and travel to New York, they love to go to New York and spend their tourist money, same with Washington, D.C. I think that we need to bridge the gap between both."

Lemon called her out though. "Salena, that's different than living among people, going to school with them, having one over for dinner, maybe having a family member, maybe dating one, marrying one. That's different than watching it on television. I watched the Beverly Hillbillies, or Lost In Space, or the Brady Bunch as a kid, but I didn't really know them."

Zito responded with empathy, however. She said, "That was the point I was taking issue with. People live where they live, and I don't think they should necessarily be punished because that's where people settle."