Fox host rampages at black 'Hamilton' actor: Stick to 'hip hop and dancing around the stage' 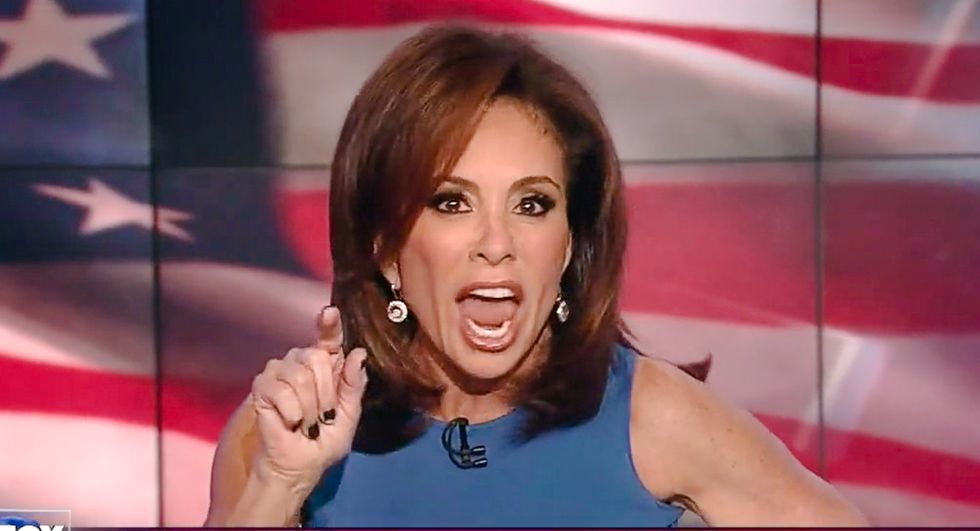 Fox News host Jeanine Pirro blasted the cast of "Hamilton" over the weekend after one of the black actors told Vice President-elect Mike Pence that Americans feared their rights would not be protected under Donald Trump's presidency.

After the curtain call "Hamilton" curtain call on Friday night, actor Brandon Victor Dixon was seen telling the future vice president that he hoped "this show has inspired you to uphold our American values and to work on behalf of all of us.

Trump blasted the Broadway musical on Twitter, but Pence later told Fox News that he was not offended by the remark.

On Saturday, Pirro was seething with rage when she delivered her opening statement on her Fox News program.

"What happened in that theater one block from this studio was out-and-out reverse racism and teed-up hate!" she exclaimed.

Pirro accused the actors using a play about "our American history" as a "political bully pulpit."

The Fox News host then played a portion of Dixon's comments to Pence and wondered why the actor never lectured Hillary Clinton or Barack Obama when they attended the production.

"Last night violates everything that you say that you stand for," she charged. "You're Hamiltonians, you're students of American history. Why not hip hop about the electoral college or is that the part of the Constitution that you just want to ignore?"

"Maybe you want to dance about Hamilton, why not dance about that!" Pirro shouted. "And I've got news for you. Don't lecture this man. You may know a little about hip hop and dancing around a stage."

"I majored in American history and I saw the play 'Hamilton' and I loved it," she concluded. "But you just took the fun, the enjoyment and the memory of that play right out of me, which might explain why the number one hashtag is that's trending right now is #BoycottHamilton."