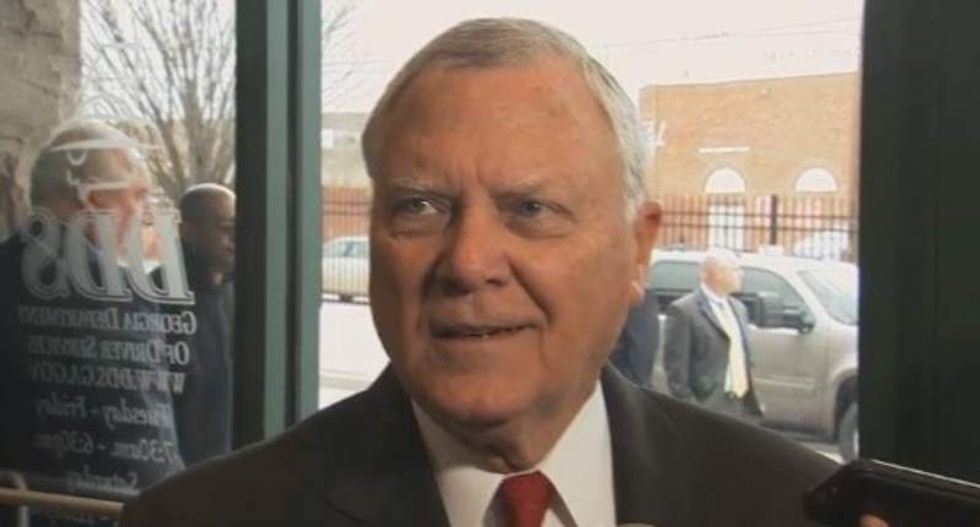 Last month, Trump-supporting Georgia Governor Nathan Deal voiced his thoughts on what black people really need (besides more Southern white men telling them what they really need, that is).

Deal was lobbying for his deeply unpopular measure that would sweep the state's public schools under centralized control, a policy opposed by teachers groups and the state's NAACP.

“The irony of some of the groups who are opposing doing something to help these minority children is beyond my logic. If you want to advance the state of colored people, start with their children,” Deal said, according to a report by Fox 5 in Atlanta released this Wednesday. His use of the anachronistic term set off a firestorm of criticism, and yesterday, the Governor said he meant "no offense" in using such loaded language.

Dr. Francys Johnson, President of the NAACP's Georgia chapter, tells Raw Story that the Governor had a few different aims with his statement. First, Johnson believes he was sending a subtle message to a certain kind of voter.

"It's coded language used by Governors in the South as a way of sending messages to certain people—like Trump does," Dr. Johnson said over the phone. "The use of colored is well placed. It's not a mistake on his part. He was calling people of color 'colored people' ... for parts of a community, that means something." Johnson points out that Deal has not been quite as opinionated on other racially sensitive matters. He refused to get involved in the debate over racially segregated proms. The Governor also kept his thoughts to himself when state Rep. Tommy Benton said the KKK "made a lot of people straighten up."

Here's some history that might help explain why it's problematic for the white Governor of a Southern state to deploy the term "colored people" in 2016.

Around the turn of the 20th century (the NAACP was founded in 1909) the term "colored" still had a largely positive connotation. But starting in the 1970s, it was  supplanted by black and African-American as the most common ways to refer to Americans of African descent. For that reason the term "colored" seems frozen in history.

"Like 'Oriental,' 'colored' harkens back to an era of exclusion, a time when Jim Crow was in full force, and blacks used water fountains marked 'colored' and sat in the 'colored' sections of busses, beaches and restaurants," Nadra Kareem Nittle wrote in Race Relations.

"In short, the term stirs up painful memories." But for Deal (and Trump's) target demographics, the term might conjure a "simpler time" when "people knew their place." A recent poll found that 72 percent of Trump supporters think America has changed for the worse since the 1950s.

Beyond the realm of rhetoric, Johnson believes the Governor is trying to distract voters from the flaws of Amendment 1, which would alter the state constitution to allow for a state entity to take control of schools categorized as "failing." The amendment has sparked vigorous opposition from the unlikely coalition of teacher's groups, Democrats, Republicans—even libertarians. Opponents of the measure point out that poverty is the root cause of "failing" schools and that's what the Governor should be prioritizing, not creating more state bureaucracy.

"The Governor may need to go back to school himself," Johnson quips. If he studied more history, he'd know about the NAACP's historic role in the state of Georgia, particularly around advancing education. If he read his sociology, he'd know that even in the places where the so-called "school reform" movement has shown success, it's looked nothing like his proposal.

If he's really concerned about the educations of poor black children, Johnson says, the problems that should be occupying his time are poverty and racism. Anything else is "a band-aid solution."

"Either you believe in education or you don't," Johnson says. "The policy he's pushing is a failed policy that doesn't help students of color—or any students."

To critics who might note the seeming strangeness of the NAACP having "colored people," in its name, Johnson says, "The NAACP was founded by a diverse group of Americans that believed America could work better to live up to its promises," he says. "Not just African Americans, but people of all hues who believe in a just society."

But Johnson would rather discuss policy, not semantics, with the Governor. "It's wrong for him to try and deflect. If he wants to deal with substantive issues of politics, I will debate him. Anytime, anywhere he chooses."