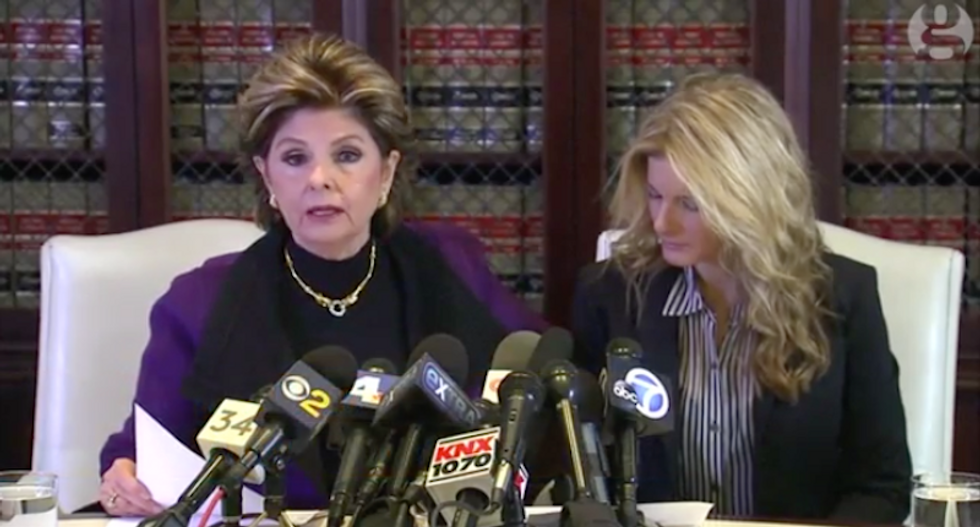 Attorney Gloria Allred is still representing a number of women who have accused Donald Trump of sexual misconduct during his campaign run, and she announced on Friday that her clients can sue the President-elect for defamation, according to the Guardian.

At a press conference on Friday, Allred said, "Now Mr. Trump has been elected President of the United States. He now has the opportunity to begin his term with a clean slate. I challenge him to seize this opportunity now, to retract his statement that these accusers are liars and that their allegations are fabrications and fiction."

Summer Zervos, a former Apprentice contestant who accused Trump of sexually harassing her appeared alongside Allred. "He now has the largest bully pulpit in the world, and he has not yet taken back his threat to sue me and the others who came forward," Zervos said, visibly upset by the matter.

"I want to make it clear that even though it is hard and painful to speak up against the world's most powerful man, I will continue to speak the truth and I refuse to be intimidated into silence," she said.

Allred noted that at this time, her clients have not planned to sue the President-elect. However, if he continues to fabricate lies about the women, Allred said, "It is my recommendation that they consider filing a lawsuit against him for defamation."

Zervos appeared afraid at that moment, grabbing Allred's arm, emotional and shaken. She said, "What ever happened to a good old fashioned 'I'm sorry'?"

After multiple women came forward accusing Trump of sexual assault and harassment in early October, Trump took to Twitter and referred to the women at multiple rallies as losers. He suggested they were seeking attention and called them liars. He also implied that two of them were not attractive enough for his attention.

The President-elect has made a lot of terrible statements over the course of his campaign, and legal groups are ready to fight him moving forward if he attempts to deliver on many of his campaign promises.

A defamation lawsuit from Allred's clients could likely have serious implications for Trump's administration, especially given that he is already facing another legal battle later this month.

Watch the clip in full below.