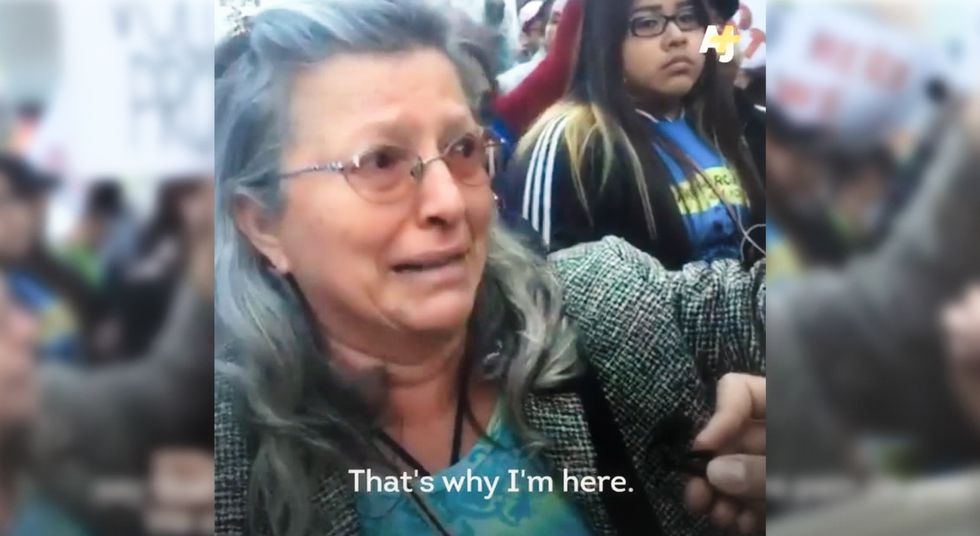 A woman protesting Donald Trump over the weekend choked up as she explained that the president elect triggered memories of her sexual assault.

AJ+ reporter Ahmed Shihab-Eldin, who covered anti-Trump protests in New York City over the weekend, said that one woman stood out because she was overcome with emotions during an interview.

"I have a lot of pain," the woman told Shihab-Eldin.

"I can see the pain on your face," the reporter noted. "Why do you have pain?"

"Because I was abused when I was 12 years old," the woman explained, nearing tears. "And I remember everything when he said that awful thing. That's why I'm here."

The protester said that she was specifically referring to a leaked Access Hollywood video in which Trump brags about groping women's genitals without permission.

"Grabbing women's things, that he feels that he can do that to us," the demonstrator stated as her voice trembled. "I come from a country when I was walking in my city, men say that they own me, say that they can grab me everywhere. That was awful."

"And I'm feeling the same thing as 36 years ago. That's horrible."

Watch the video below from AJ+.

This sexual assault survivor found herself triggered by Trump's words about women.

That's why she's now protesting against his election. pic.twitter.com/R3WZVM0s3J