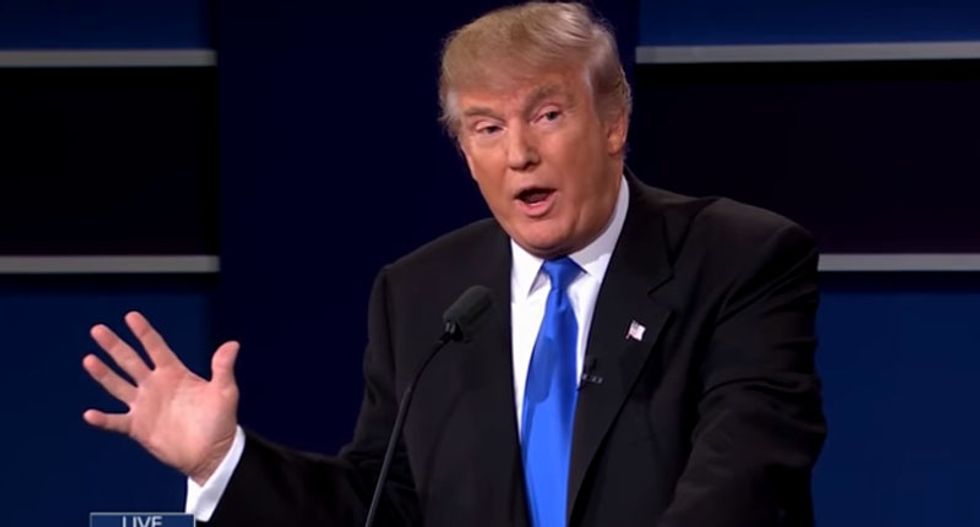 Donald Trump at the first presidential debate on September 26 (Screenshot)

After firing up crowds with boisterous and sometimes divisive campaign rhetoric, Donald Trump has appeared to moderate some stances since he won the U.S. presidential election on Nov. 8.

Such shifts have cheered critics concerned about his campaign positions while angering some supporters. But Trump also sometimes modified positions during the campaign, so the Republican president-elect could change stances again before or after he takes office on Jan. 20.

The following are some of his changing positions:

To chants from crowds of "Lock her up," Trump said during the campaign that if he won the election, his administration would prosecute his Democratic rival over her use of a private email server while she was secretary of state, and over what he said were abuses of her position with regard to her family's charitable foundation. During the second presidential debate on Oct. 9, he said he would appoint a special prosecutor and seek to jail Clinton if he won.

Asked during a New York Times interview on Nov. 22 about reports that he no longer wanted to prosecute Clinton, Trump said, "I want to move forward, I don’t want to move back. And I don’t want to hurt the Clintons. I really don’t." However, he said "no" when asked if he was definitively taking the idea of investigating Clinton off the table.

Trump has called global warming a hoax and during the campaign he said he wanted to withdraw the United States from the 2015 Paris Agreement among almost 200 nations, which came into effect on Nov. 4. Instead, he said he would push ahead and develop cheap coal, shale and oil. On Nov. 12, a source on his transition team said Trump's advisers were considering ways to bypass a theoretical four-year procedure for leaving the climate accord.

Asked in the Times interview on Nov. 22 if he was going to take America out of the world's lead of confronting climate change, Trump said, "I have an open mind to it. We’re going to look very carefully." Asked if he believed human activity causes climate change, he said, "I think there is some connectivity. There is some, something. It depends on how much."

During the campaign, Trump said he would repeal President Barack Obama's signature Affordable Care Act. He called Obamacare a "disaster" and said he would replace it with a plan that would give states more control over the Medicaid health plan for the poor and allow insurers to sell plans nationally.

In an interview with the Wall Street Journal published on Nov. 11, Trump said he was considering keeping parts of the law, including provisions letting parents keep adult children up to age 26 on insurance policies and barring insurers from denying coverage to people with pre-existing conditions. "Either Obamacare will be amended, or repealed and replaced," Trump told the Journal.

On the campaign trail, Trump repeatedly promised to build a wall along the U.S.-Mexican border to curb illegal immigration and that Mexico would pay for it. He also said he would deport millions of illegal immigrants and proposed a temporary ban on Muslims entering the country as a means of countering terrorism. He never retracted this but in the later stages of the campaign, rephrased it as a proposal to temporarily suspend immigration from regions deemed as exporting terrorism and where safe vetting cannot be ensured.

In an interview with CBS program "60 Minutes" that aired on Nov. 13, Trump said he really planned to build a wall. However, asked if this could be a fence, he said it could be part wall, part fence. "For certain areas I would (have a fence) but certain areas, a wall is more appropriate. I’m very good at this - it’s called construction," he said.

Asked about deporting illegal immigrants, he told CBS that the initial focus would be on those immigrants who are "criminal and have criminal records," who he said probably numbered 2 million and possibly even 3 million.

During the campaign, Trump said the United States should revive use of waterboarding and "a lot more" when questioning terrorism suspects. Waterboarding, an interrogation tactic that simulates drowning, is widely regarded as torture and was banned under President Barack Obama.

In the Nov. 22 Times interview, Trump said he had been impressed when he asked Marine General James Mattis, a potential pick for defense secretary, about waterboarding and Mattis replied, "I’ve always found, give me a pack of cigarettes and a couple of beers and I do better with that than I do with torture." While the response had not made him change his mind, Trump said, it had impressed him that the use of waterboarding was "not going to make the kind of a difference that maybe a lot of people think."