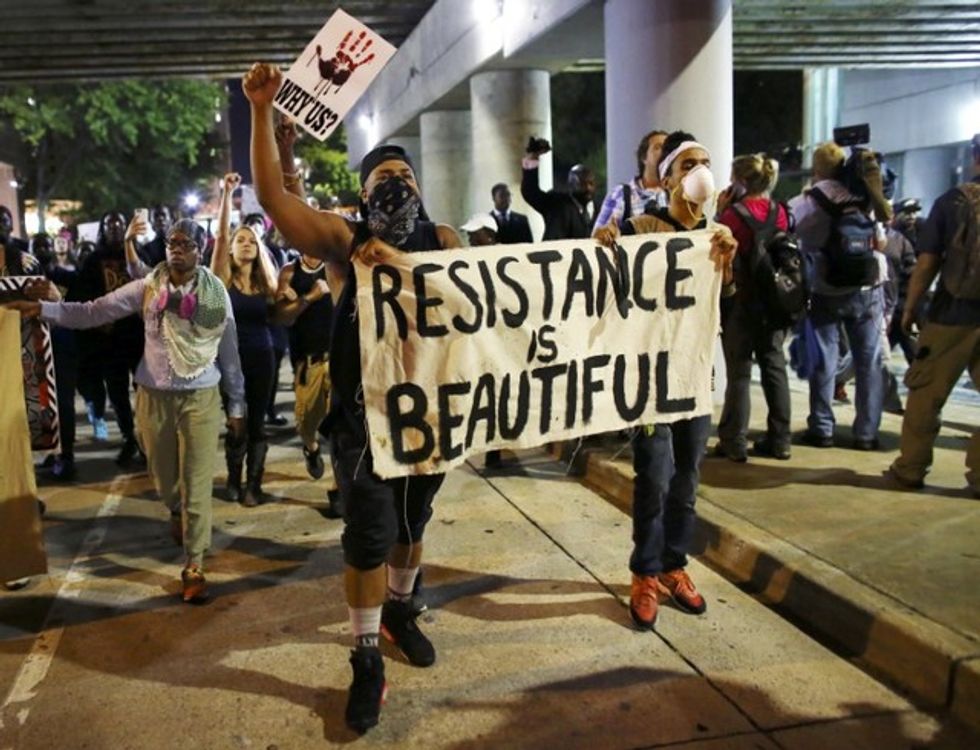 Protesters walk in the streets downtown during another night of protests over the police shooting of Keith Scott in Charlotte, North Carolina, U.S. September 22, 2016. REUTERS/Mike Blake

There is a song about Black Tuesday of the Great Depression, written by Bob McDill and later performed by the band Alabama, that says: “Well somebody told us Wall Street fell, but we were so poor that we couldn’t tell.”

I learned about that song from a county commissioner in rural Josephine County, Oregon, a Donald Trump stronghold. The commissioner’s point was clear: Whatever prosperity this nation is enjoying is not shared here.

He is right. But Trump supporters are wrong to think that rural or Rust Belt whites have special claim to the devastating human costs from automating and outsourcing American industrial jobs, whether in sawmills or steel mills, factories or mines. What that win obscures — but we must see — is that the suffering from deindustrialization is shared across racial groups. From African-Americans in Detroit to rural whites in eastern Kentucky, from Puerto Ricans in Pennsylvanian mill towns to Latinos working ill-paying factory jobs in the South, this is a national story. It is shared by women and men, the North and the South, Evangelicals and agnostics.

Across our country are thousands of majority-minority communities — urban, historically suburban and rural — that have borne the weight of deindustrialization right alongside their white counterparts. These places went from being toiling labor colonies of the First Gilded Age to the hometowns of the mid-century middle class. By the turn of the 21st century, they had become our craters of post-industrialism, filled with the ranks of a working class that can barely stay out of poverty.

For a racial rainbow of Americans, those hardships are poised to get worse before they get better. Technological advances position us on the cusp of automating huge additional segments of our middle-class workplace. Robotic substitutes for many remaining bedrocks of reasonably paid but low-skilled jobs are transitioning from prototypes to products. Truck, bus and other automobile driving, warehouse and logistics, and food service work are all poised to take a new body blow.

As of now, these places and people don’t see their common ground. Trump’s indulgence of white nationalism and his exploitation of cultural divisions within the electorate threaten to keep them apart. But beneath the Occupy, Black Lives Matter and Trump movements, there is powerful shared terrain. There are coalitions that can and must cut across racial groups, across our deep urban and rural divides.

As much as it was true last week, we need an infrastructure agenda for the Rust Belt. We need good public services even where people can’t afford to pay for them, including better education in advanced manufacturing and the STEM fields. We need coalitions built on class, not race or party affiliation. Bill Clinton told West Virginia that Hillary was going to come for them, no matter how they voted. Now Trump needs to do the same — coming for Flint and Camden as much as for rural Ohio.

Today, it is hard to have much faith in his capacity or will to do that. With all three branches of government lined up to accelerate our national experiment with drowning public services, it’s hard to see anything but further atrophy and decline. Trump’s tirades against trade, against “the system,” against Muslim and Latino scapegoats are as vague as they are venomous. His tax plan, his own life experiences and his party’s agenda give every reason to think that he and Congress are aligned to further grease our slide into the Second Gilded Age, with the rest of us distracted by hate and polarization. If all we can hear is screaming, it’s hard not to fall deaf.

But we nonetheless must press and demand and organize, beginning to stitch together the multi-racial poor people’s movement that is so long overdue in the modern era. Against much evidence to the contrary, today I will nurture scraps of hope that Trump will actually try to help America’s communities once known for coal, steel, manufacturing, timber and textiles. Against all evidence to the contrary, I will hope he’ll care about the pains of industrial automation and globalization even where those pains are borne by so many millions of non-white Americans. But if he doesn’t, if he can’t, there is a bigger coalition we can build beyond him.

The “Song of the South” reminds us that we’ve been here before and we can make it through again. It turned out that Black Tuesday had much more pain to deliver beyond Wall Street, but we put together a government that helped get us out of those hard times. The lyrics conclude: “The county got the farm, and we moved to town; Poppa got a job with the TVA; We bought a washing machine, and then a Chevrolet.”

I, too, want to make America great again. All of it.