Mexicans on US border fear economic catastrophe if Trump wins ? 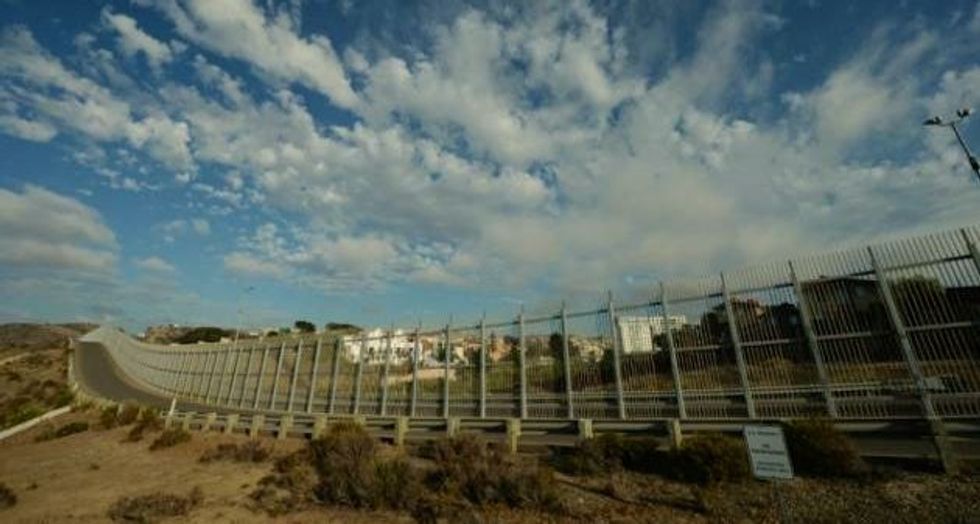 AFP/AFP/File - View of the Mexican town of Tijuana from the US side of the border, showing the fence that divides the two countries on August 20, 2014

Mexicans on the U.S. border anxiously awaited the outcome of the U.S. presidential election on Tuesday, plagued by fears of economic disaster if Republican Donald Trump wins and tries to choke local industry, isolate the country and deport millions.

Trump's campaign has been one of the most unpopular in living memory in Mexico, ranging from stinging verbal attacks on its migrants, threats against its trade agreements, to his repeated vows to seal off the country behind a huge border wall that he insists Mexico will pay for.

Nowhere has the bad-tempered contest been felt more acutely than in the Mexican cities straddling the U.S. border, which hundreds of thousands of people cross for work every day, and acts as a bridge for $500 billion (403 billion pounds) in annual bilateral trade.

Trump launched his bid accusing Mexico of sending rapists and drug peddlers across the border, prompting the government to accuse him of stirring up hatred and fanning concerns on the border that racial prejudice is becoming more acceptable.

The tycoon says he could scrap the North American Free Trade Agreement that took effect in Mexico, the United States and Canada in 1994, and he has threatened to impose tariffs of up to 35 percent on Mexican-made goods to help U.S. industry.

"We're very worried. We know what Donald Trump is looking to do, which is limit the imports, he wants to manufacture everything in the States," said Marcello Hinojosa, president in the border city of Tijuana of industry group Canacintra.

"But this has been analysed by both the United States and by Mexico and it's suicide for both countries."

Mexican business leaders say about 40 percent of the average Mexican factory export is made of U.S. content and argue the two manufacturing sectors are so closely intertwined that it is impossible to take steps against one without damaging the other.

Trump, who polls show trailing Democratic rival Hillary Clinton in a tight race, says Mexico is "killing" the United States on trade. However, commerce between the two has grown much faster than their respective economies since NAFTA, World Bank and U.S. data show.

Mexico sends more than 80 percent of its exports to the United States, and the U.S. Chamber of Commerce says roughly 6 million American jobs depend on trade with Mexico.

Trump has also blasted U.S. companies for investing in Mexico, which houses billions of dollars worth of manufacturing plants, especially around Mexico's northern border. Trump blames the Mexican factories for jobs losses in the United States.

If protectionist policies gain ground, prices for products and services would go up, and jobs would eventually be lost in Mexico, putting pressure on people to migrate - or exposing them to the lure of violent crime, Hinojosa said.

Rarely have Mexicans expressed such strong views about U.S. presidential candidates as during the current campaign.

Mexicans favour Clinton in the race by 10 to 1, according to a poll published in Mexico in late September. But the tightening of polls in the last two weeks has rattled their confidence she will win.

"Personally, though I think I speak for many Mexicans, I hope Trump loses," said Rodolfo Monroy, 85, a restaurant owner in the border city of Nogales, opposite Nogales, Arizona. "Why? Because he's rude, because of what comes out of his mouth. He doesn't like us Mexicans," he said, with a flash of anger on his face. "We're going to be in real trouble (if he wins)."

Wadih Kuri, Chief Executive of ABC Aluminum Solutions, a local aluminium company, recalled being labelled "beaner" as a Mexican studying across the border, the sort of prejudice he said Trump's campaign was encouraging again.

"Are we still at the same place where kids need to be ridiculed because they're from Mexico? And that's all he's doing. So If I'm nervous, I'm nervous for the culture that he's inspiring," said Kuri, who now lives in San Diego.

Trump's threats to deport more than 11 million undocumented migrants living in the United States, roughly half of whom are Mexican, could also put Mexican authorities under strain, said Cuauhtemoc Galindo, the mayor of Nogales, Mexico.

"Having someone govern who feeds racism, hate, this sort of thing ... will also make a lot of Mexicans stop visiting (the United States) out of fear, out of a sense of pride, which will also hurt the U.S. economy," Galindo said.

Crossing into the United States from Tijuana, one of the busiest thoroughfares in the hemisphere, construction worker Alejandro Ortiz said "every aspect" of his life would be affected if Trump wins - which he fears will happen.

"This is going to affect me whenever I cross the border, they're going to investigate me more, just because of my colour, because I speak Spanish," said Ortiz, 36, who was born in the United States but grew up in Mexico.