Michael Steele: Petraeus' conviction for passing secrets to his mistress was a just minor 'hiccup' 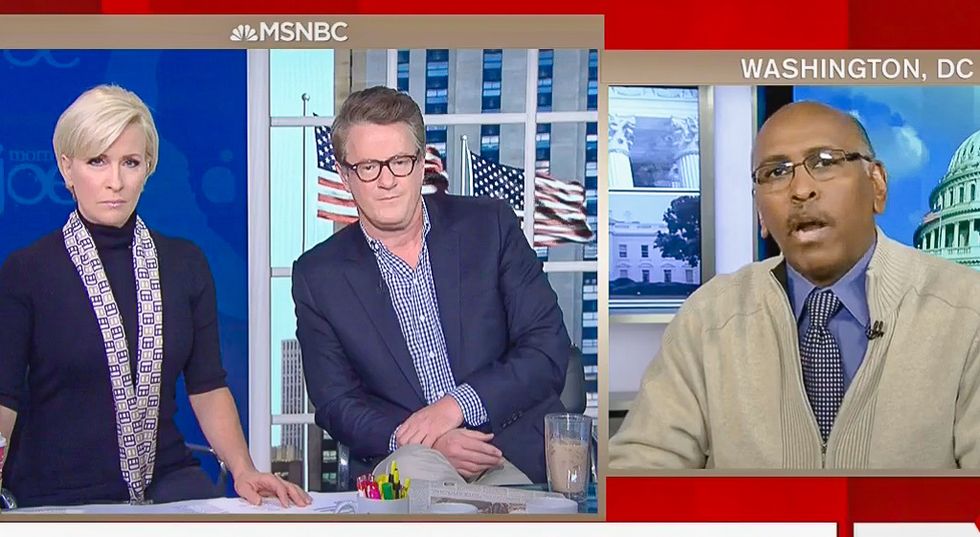 MSNBC contributor Michael Steele asserted on Tuesday that former CIA Director David Petraeus' conviction for passing classified information to his mistress was only a minor "hiccup" in his career.

On Monday, Petraeus became the latest secretary of state candidate to meet with President-elect Donald Trump.

Petraeus pled guilty in 2015 to providing classified secrets to his biographer, Paula Broadwell, with whom he was having an affair.

Steele, a former RNC chairman, praised Trump's meeting with Petraeus on Tuesday's Morning Joe, noting that "people in Washington" were "very, very comfortable with Petraeus despite the hiccup of the issue with the documents and the trial and all of that."

"He's still held in high regard on both sides of the aisle on Capitol Hill so his selection would send a very, very strong signal, not just around the Washington, but globally," Steele opined.

FBI Director James Comey testified to Congress earlier this year that Hillary Clinton's private use of an email server was far less damning than Petraeus' crime of sharing classified information with his mistress.

According to Comey, the Petraeus case "illustrates perfectly the kind of cases the Department of Justice is willing to prosecute."

'Your body belongs to Christ': US anti-abortionists see divine hand in court ruling

Diana Villanueva's rapist took her to an abortion clinic when she was just 16 years old and told her to terminate her pregnancy.

She wasn't greeted by the crowds of protestors who often gather outside facilities in the United States to try to persuade women to change their minds.

America won’t have to wait long in the post-Roe world to see how voters react to the end of federal protection for a woman’s right to an abortion.

Four states – Kansas, Vermont, Kentucky and Montana -- already had abortion-related initiatives on the ballot before the U.S. Supreme Court reversed Roe v. Wade last week. In addition, pro-choice advocates in Michigan are collecting signatures for an amendment enshrining the right to an abortion in the Michigan state constitution.