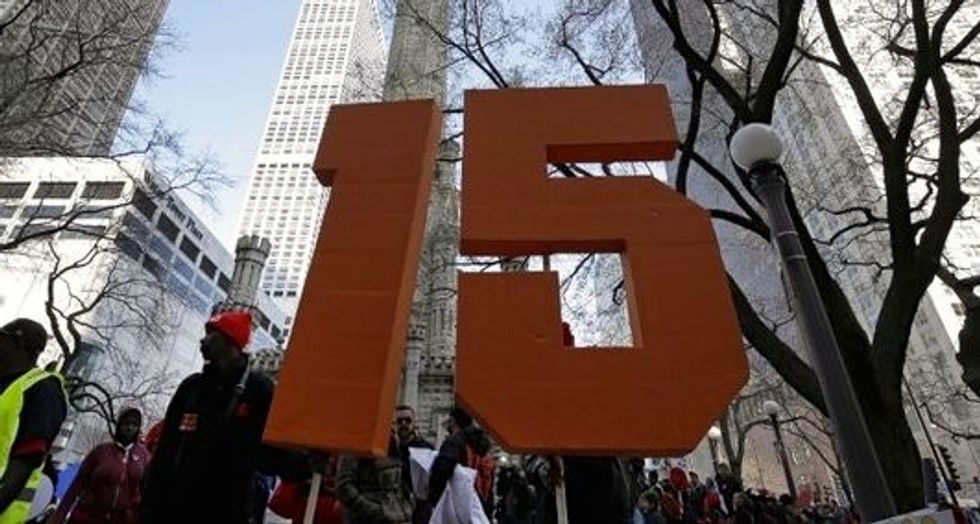 Voters in four states raised minimum wages on Tuesday even as Republicans who oppose such increases won nationally, indicating that workers may still be able to improve compensation at the expense of restaurants, retailers and other employers.

Pay hikes appeal to working-class voters who lifted Republican Donald Trump to a decisive win in the U.S. presidential race, and also to liberals who voted for Hillary Clinton, worker advocates said.

"This could be a uniting issue," said Saru Jayaraman, co-director of the Restaurant Opportunities Centers United and director of the Food Labor Research Center at University of California, Berkeley.

Voters in Arizona, Colorado and Maine voted to raise their minimum wages to $12 by 2020. Washington State agreed to take the minimum wage to $13.50 in the same time span.

New Jersey Governor Chris Christie vetoed a $15 per hour minimum wage bill this year, calling it a "radical increase." Christie, a stalwart Trump supporter, could have a place in the new administration.

"For the next four years ballot initiatives are going to be the only way forward for us to be able to raise the minimum wage for working Americans and their families," Schleifer said.

The United Food & Commercial Workers International Union President Marc Perrone said stakeholders of the minimum wage movement, including different labor unions and worker groups, are also looking at Pennslyvania, New Mexico, Massachusetts and Rhode Island for state ballot initiatives. "By January, February next year we are going to start to research so we can prep for the next election cycle."

Perrone said selection of states will ultimately depend on what the electorate in each state wants.

Restaurants and retailers are most exposed to minimum wage hikes, as the two largest U.S. employers of low-wage workers. Stephen Anderson, restaurant analyst at Maxim Group, said the latest state minimum wage increases will affect Chipotle Mexican Grill, Jack in the Box and Red Robin Gourmet Burgers the most.

Wal-Mart Stores Inc, the largest retailer and private sector employer in the United States, raised its minimum wage for store workers to $10 per hour in 2016. Its rival Target Corp also raised floor wages to $10 an hour.

Anderson said the added cost of wage increases might be offset significantly by business-friendly policies championed by Trump and the Republican-controlled Congress. These could include changes to the "Obamacare" healthcare law and a rollback of new rules broadening overtime eligibility.

Trump also will have the opportunity to weaken regulations and change the makeup of the National Labor Relations Board. The NLRB is considering, for instance, whether McDonald's Corp is liable for labor law violations by franchisees, and could be required to bargain with workers who unionize.

Dan Schlademan, co-director of OUR Walmart, a worker group seeking higher wages and better benefits at Walmart, said: "The bigger concern here for us is what happens with the labor board and the Department of Labor, where Republican control can change important things for workers and make them detrimental."

Trump has said he would support a $10 federal minimum wage, adding it should be left up to the states to lead on the issue.

"Voters in red, purple and blue states across the country decisively backed raises to the minimum wage, delivering badly needed raises for 2.3 million workers," she said.