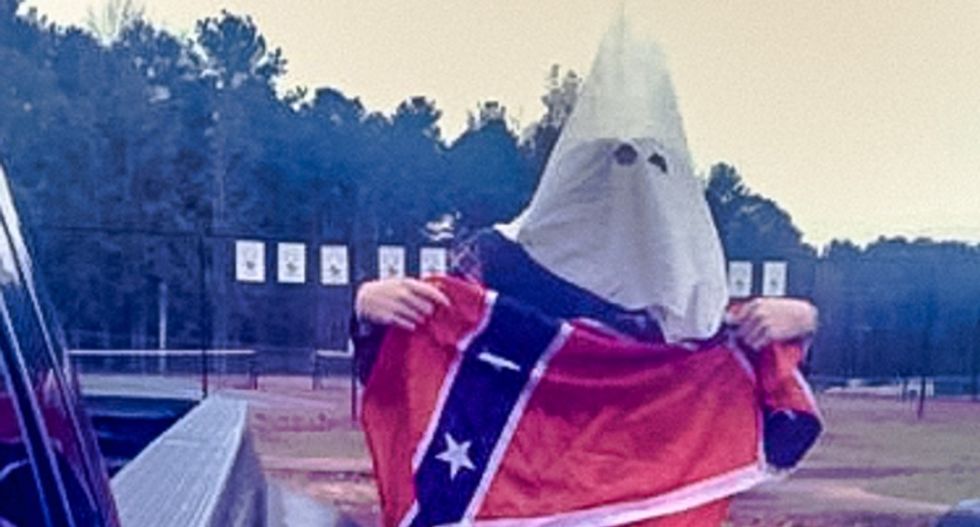 The North Carolina KKK didn't march on Wednesday morning, but they do plan to hold a celebratory march for Trump after all.

Wednesday morning an image went viral of people marching on a bridge in North Carolina. One person seemed to be wearing a white hood. The person posting the graphic claimed that it was a KKK march celebrating the Trump victory, but it turned out to be an image from way before the election and not of the KKK.

When Snopes contacted the Klan for comment about the viral image they seemed to have seen the image as motivation. On their website, The Loyal White Knights of the Ku Klux Klan announced an upcoming victory rally called the "klavalkade Klan parade" on Dec 3 to honor the electoral victory of Donald Trump. The Klan endorsed Trump in their newspaper just before the election.

"Our goal is to help restore America to a White Christian nation, founded on God's word," the site says. They insisted, however, that they don't want bad things to happen to non-whites. "We simply want to live separate from them ... As GOD intended. (Lev.20:24-25)"

They outline the case against integration saying that the society is damaged when races mix. "We are not evil; hateful people as our enemies would have you believe," the site continues. "We are common white people from all walks of life who have recognized the problems that our race is facing."

This seems to be a true statement. There was a silent majority of whites that helped elected Donald Trump on Tuesday and among them are likely many voters with the same sentiment.

While the KKK site tries to maintain that they don't want bad things to happen to non-whites, they were quick to clarify what once happened to them.

"Most of our youth are on DRUGS or pregnant with a mongrel child," the site reads. "If our forefathers could see America today they would have our Government Leaders put to DEATH. For Treason against the American people. They are rolling in their graves as you read this now. We as a people can change this course in which America has taken."

They say that they would like to see this change course after talking about forefathers that would put people to death. That's their agenda moving forward as supporters of the new Trump administration.