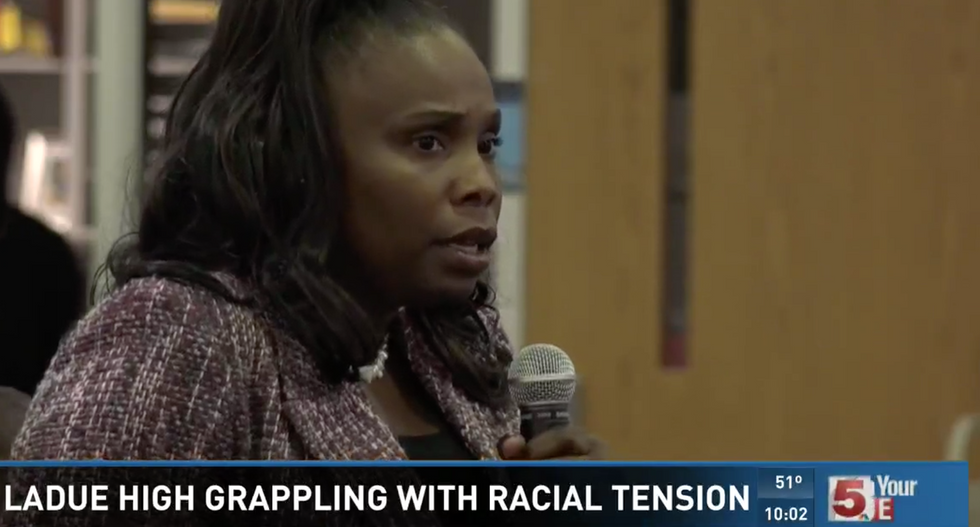 Dozens of Missouri high school students Wednesday walked out of class to protest racially charged incidents and what students say is a lack of appropriate response from the school administration.

According to the St. Louis Post-Dispatch, at least 150 students assembled outside Ladue Horton Watkins High School and marched towards the district’s administrative offices, demanding speak with the superintendent.

The protest stemmed from an incident Thursday when a group of students on a school bus chanted “Trump” while two white students told their black peers to sit in the back of the bus. Those two students were disciplined.

Tuesday, parents, teachers, students and alumni gathered at the school board meeting to express their disgust over last week’s incidents.

Tango Walker Jackson, whose 15-year-old daughter was on the bus, said Thursday’s event was “not an isolated incident.”

“This is the fifth racially charged incident with my daughter since the beginning of the school year,” Walker Jackson told the meeting.

Walker Jackson’s daughter, Ladue Horton Watkins High sophomore Tajah Walker, also spoke at the meeting, telling the school board she will not tolerate this type of behavior.

Some parents were outraged that the two white students were already back in school, arguing the administration should further investigate what led to Thursday’s display.

“You imagine having to keep your cellphone on you constantly because you don’t know what’s going to happen to your child?” Walker Jackson asked Tuesday night. “Fix it.”

The district said it’s working on several tolerance initiatives, including diversity and equity training for staff. But Ladue Horton Watkins High principal acknowledged, “there is continued work to be done and we do know challenges lie ahead but now is our opportunity to bridge these issues.”

At the walkout Wednesday, Walker said the racially charged incidents required more of a response from the administration.

"We'll come back to school when they treat us right," Walker told the Dispatch. "If they suspend me, they better suspend everybody."

Watch the video below, via 5 on Your Side: