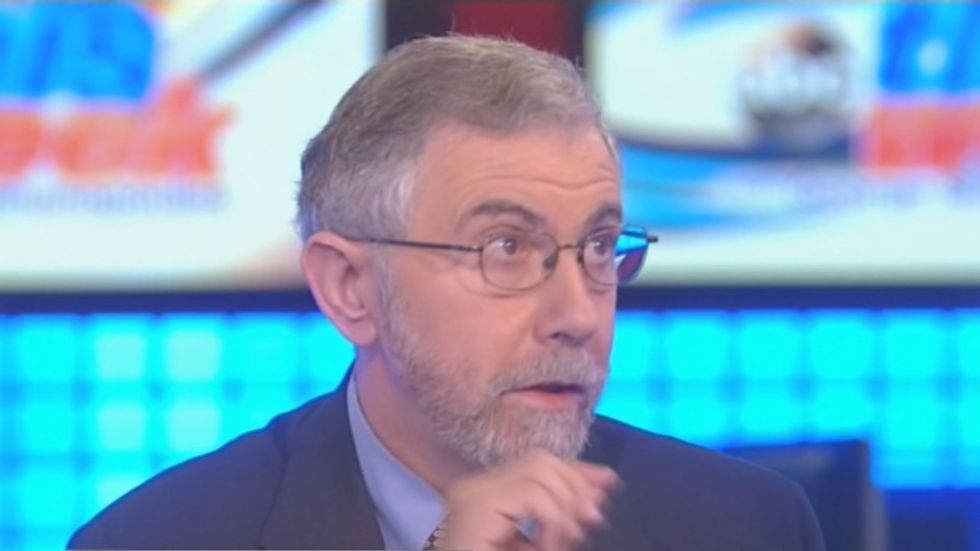 Paul Krugman is doing his best to regroup after Trump's electoral win. It ain't easy. In his Friday column, entitled "Thoughts for the Horrified," he is hardpressed to come up with silver linings. But he does have some reflections, and they are fairly grim.

First of all, remember that elections determine who gets the power, not who offers the truth. The Trump campaign was unprecedented in its dishonesty; the fact that the lies didn’t exact a political price, that they even resonated with a large bloc of voters, doesn’t make them any less false. No, our inner cities aren’t war zones with record crime. No, we aren’t the highest-taxed nation in the world. No, climate change isn’t a hoax promoted by the Chinese.

So if you’re tempted to concede that the alt-right’s vision of the world might have some truth to it, don’t. Lies are lies, no matter how much power backs them up.

And once we’re talking about intellectual honesty, everyone needs to face up to the unpleasant reality that a Trump administration will do immense damage to America and the world. Of course I could be wrong; maybe the man in office will be completely different from the man we’ve seen so far. But it’s unlikely.

Krugman's biggest worry (take your pick) is climate change. The columnist had cheered the small, though insufficient, progress made on renewable energy, some policy changes and international agreements that might have made a dent.

The signs are not too great for civil liberties either.

Krugman did back-pedal a bit from his election night prediction of an immediate economic crisis due to Trumponomics. He promised to return to that subject in the coming weeks. Stay tuned. Still, he seriously doubts that Trumpist policies will help the people who voted for him and have hung their hopes on him, the white working class.

Turning away from politics is not the answer, Krugman cautions, however great the impulse to do so may be. "I’m not saying that we should all volunteer to die on the barricades," he writes. "I don’t think it’s going to come to that, although I wish I was sure. But I don’t see how you can hang on to your own self-respect unless you’re willing to stand up for the truth and fundamental American values."

The road back to the country the center-left envisions will be long.