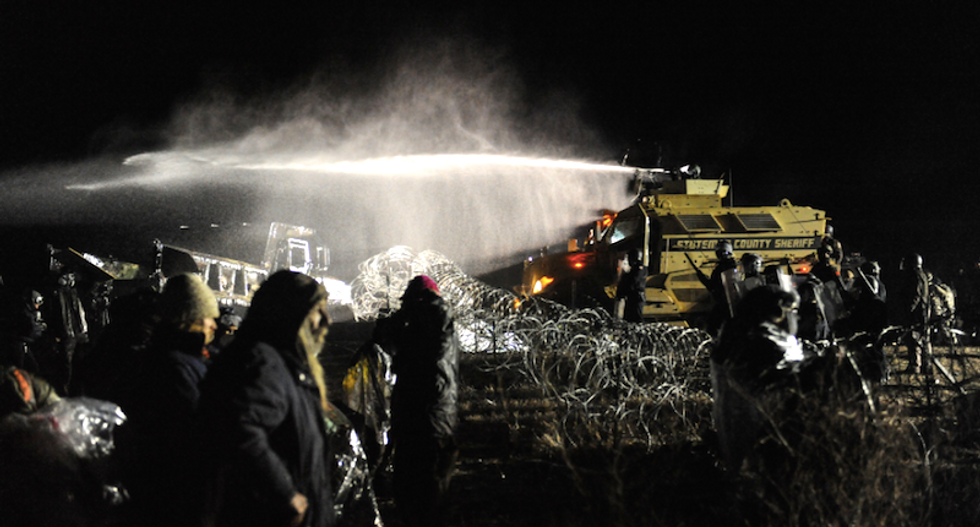 Police use a water cannon on protesters during a protest against plans to pass the Dakota Access pipeline near the Standing Rock Indian Reservation, near Cannon Ball, North Dakota, U.S. November 20, 2016. (REUTERS/Stephanie Keith)

An estimated 400 protesters mounted the Backwater Bridge and attempted to force their way past police in what the Morton County Sheriff's Department initially described as an "ongoing riot," the latest in a series of demonstrations against the Dakota Access Pipeline.

A statement from the agency said one arrest had been made by 8:30 p.m. local time, about 2 1/2 hours after the incident began 45 miles south of Bismark, the North Dakota capital. About 100 to 200 protesters remained after midnight.

The Backwater Bridge has been closed since late October, when activists clashed with police in riot gear and set two trucks on fire, prompting authorities to forcibly shut down a protesters encampment nearby.

The Morton County Sheriff's Department said officers on the scene of the latest confrontation were "describing protesters' actions as very aggressive."

Demonstrators tried to start about a dozen fires as they attempted to outflank and "attack" law enforcement barricades, the sheriff's statement said.

Police said they responded by firing volleys of tear gas at protesters in a bid to prevent them from crossing the bridge.

Activists at the scene reported on Twitter that police were also spraying protesters with water in sub-freezing temperatures and firing rubber bullets, injuring some in the crowd.

Police did not confirm those reports, but later said protesters had hurled rocks, striking one officer, and fired burning logs from slingshots. 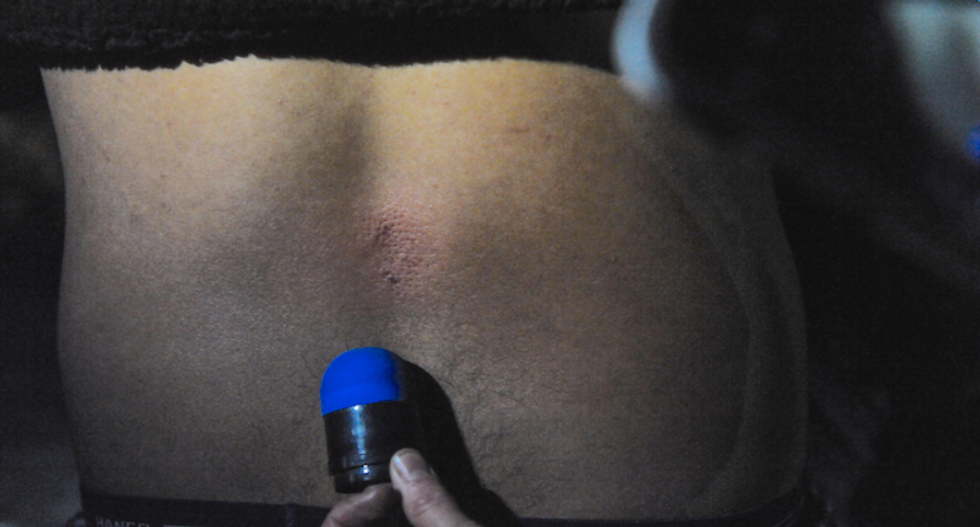 A rubber bullet and a rubber bullet wound are displayed for the camera during a protest against plans to pass the Dakota Access pipeline near the Standing Rock Indian Reservation, near Cannon Ball, North Dakota, U.S. November 20, 2016 (REUTERS/Stephanie Keith)[/caption]

The clashes began after protesters removed a truck that had been on the bridge since Oct. 27, police said. The North Dakota Department of Transportation closed the Backwater Bridge due to damage from that incident.

The $3.7 billion Dakota Access project has been drawing steady opposition from Native American and environmental activists since the summer.

Completion of the pipeline, set to run 1,172 miles from North Dakota to Illinois, was delayed in September so federal authorities could re-examine permits required by the Army Corps of Engineers.

Plans called for the pipeline to pass under Lake Oahe, a federally owned water source, and to skirt the Standing Rock Sioux Reservation by about half a mile. Most of the construction has otherwise been finished.

Supporters of the pipeline, owned by Energy Transfer Partners, said the project offers the fast and most direct route for bringing Bakken shale oil from North Dakota to U.S. Gulf Coast refineries and would be safer than transporting the oil by road or rail.