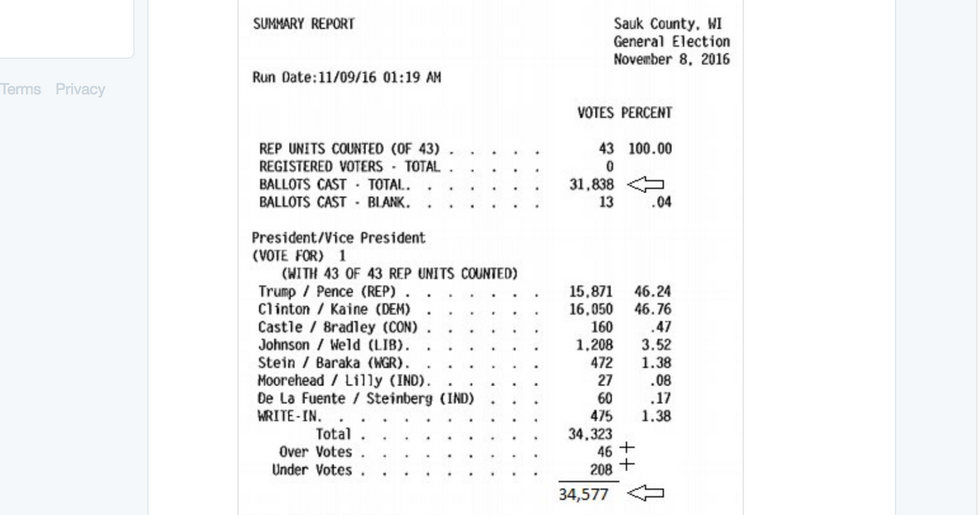 Pressure is mounting to re-examine the presidential vote in Wisconsin, where a series of screenshots posted Tuesday showed electronically tallied countywide counts erroneously added in thousands more votes to the totals than the ballots cast.

“It doesn't garner public confidence to see errors like this in election results, especially in a close battleground state,” wrote Michael McDonald, a University of Florida professor and voter turnout expert, who on Tuesday posted an image of the electronically calculated count in Sauk County, Wisconsin, showing 2,700 more votes tallied than ballots cast.

“My guess is that in Wisconsin, the Trump lead narrows when provisional ballots are counted (not enough by themselves). Fixing errors in certification could go either way,” he continued. “I know the Clinton campaign is monitoring this, so if they think the Wisconsin results merit recount, they will do so… Here's the real problem, though: Clinton also needs another large battleground state (Florida or Pennsylvania), but that doesn't seem possible, because the margins are too much… So, even if Clinton had a realistic chance of flipping Wisconsin in a recount, her campaign would probably not do it since one state is not enough alone.”

Election night’s unofficial returns found Trump ahead of Clinton by 27,000 votes in Wisconsin. In Michigan, she is behind by 11,000 votes, and in Pennsylvania by 68,000 votes. These three states were critical in giving Donald Trump his Electoral College majority.

McDonald’s tweet was not the only one surfacing Tuesday showing this over-counting anomaly. As Susan Eraslan wrote after pasting similar screenshots, “The numbers display that in 3 precincts in Outagamie County, all won by DT, more votes were counted for president than cast. Follow-up tweets found 1,500 more votes tallied than ballots cast, but soon after those screen shots were posted they were said to be corrected—or deleted.” 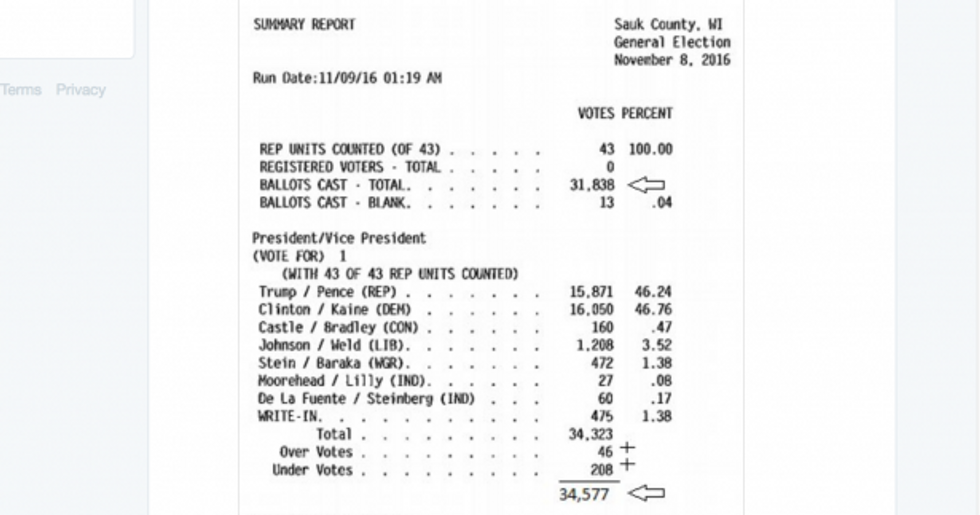 “To be clear: Certified results in just one Wisconsin county bring Trump’s margin of victory down almost 7 percent. We don’t know what about others,” tweeted Dan Solomon, who followed up with more vote-count tabulation screenshots. “Okay, this is very significant. Outagamie County released the official vote tally at 10:30am CT, the discrepancy below no longer exists.”

The vote count snafus in these two counties are among a dozen counties identified by election integrity activists as reporting improbably high turnout levels—above 85 percent—in the presidential election. “Either these voter turnout percentages are an historic achievement, unparalleled in my experience, or the unofficial results are not true and correct,” wrote Richard Hayes Phillips, a PhD statistician, in an early analysis of 12 Wisconsin counties, including Sauk and Outagamie counties.

Later on Tuesday, McDonald tweeted that 10,000 votes were added to Trump's totals in Pennsylvania, increasing his lead from 58,000 to 68,000 votes. Here, too, it's not clear of that was a tabulation error or would be corrected, he said. "Most likely this was a bonafide error corrected in a county canvass. But if one of this magnitude, who is to say there aren't others?"

These discoveries and analyses are coming against a backdrop of hectic organizing and conference calls to determine whether it is possible to raise the funds necessary to file for recounts in Wisconsin and possibly also Michigan and Pennsylvania. Some of these advocates met late last week with the Clinton campaign, which has since declined to get involved in recount efforts. The deadline for a recount in Wisconsin is Friday, followed by the other states next week.

Silver continued, "Look, maybe these researchers have a lot more than what's in the article. But there's a *very* easy explanation for the pattern in article." To which, longtime voting rights journalist Brad Friedman, of BradBlog.com, replied, on Twitter, "We don't get results from "patterns" -- (You & @NateSilver538 do. How'd that go, btw?) -- but from BALLOTS. We should bother to COUNT them!"

Stay tuned, this isn't anywhere near over. Even if there is the slimmest of chances that recounts will change the presidential election results, it appears anyone paying attention is going to see why the election integrity movement has many salient points to make about how America conducts its elections, and why the process must be improved to instill public confidence.