Rachel Maddow scraps script to offer warning on Gen. Mike Flynn: ‘He is way outside the mainstream' 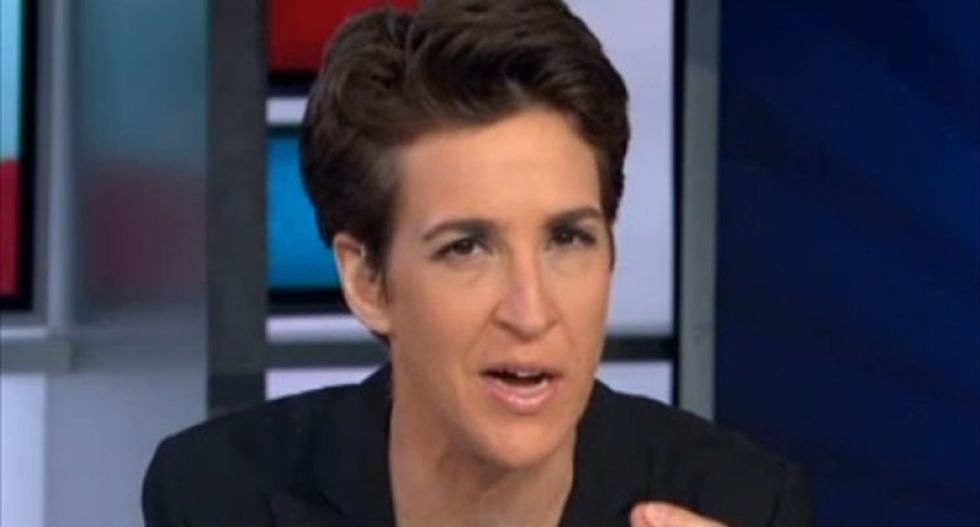 Rachel Maddow was so troubled by President-Elect Donald Trump's offer to lieutenant General Michael Flynn she scrapped the script to level with her audience.

"At this point in the show, I had something else we were going to cover, by scrapped it, because there's a thing I feel like I need to say about the Mike Flynn security announcement," Maddow confessed.

For this position, Maddow explained that all a president must do is ask someone and they accept. There is no confirmation hearing or check and balance from the U.S. Senate like other major appointments.

"So, this Mike Flynn thing is done," Maddow explained. "But the choice of Mike Flynn is a different kettle of fish than anything we might have expected from the Trump campaign. Mike Flynn calls Islam a political ideology hiding behind a religion. He calls Islam a malignant cancer. He really did sit next to President Putin and take money to go to a gala. He's been a frequent guest on Russian state television, and says he sees no difference between Russian state television, and for example, MSNBC."

But it was the final example that Maddow gave that she emphasized.

Maddow also mentioned that Flynn's intelligence firm was on the payroll of Turkey while he was working on the Trump campaign and getting classified briefings from the United States. Many have found this to be problematic because Flynn gave classified information to people that didn't have clearance on at least two occasions.

"Two former government officials with direct knowledge of the issue tell CNN that while Flynn oversaw intelligence in Afghanistan, he shared classified information with Pakistan on terror networks responsible for killing American troops," CNN recalled this week when Flynn's name was floated. "The intelligence, the sources say, came from another agency. Flynn wasn't supposed to share it. They say he was trying to convince Pakistan to stop sheltering terrorists."

"I know he's not going to get as much coverage as the other people who have to get confirmed over the next few days, but stick a pin in that," Maddow said. "It's really, really important."

Check out the remarks below: