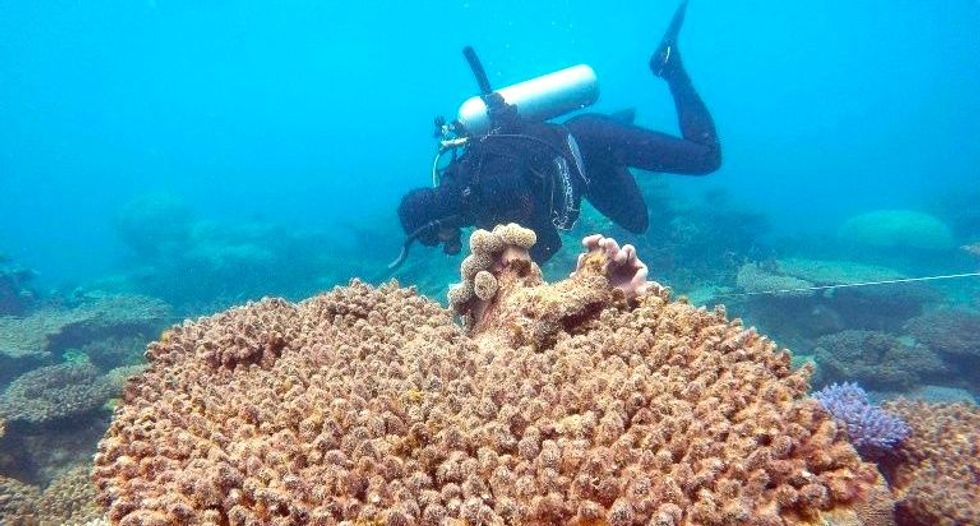 The 2,300-kilometre (1,400-mile) long Great Barrier Reef -- the world's biggest -- suffered its most severe bleaching in recorded history, due to warming sea temperatures during March and April

A mass bleaching event on the Great Barrier Reef this year killed more corals than ever before, scientists said Tuesday, sounding the alarm over the delicate ecosystem.

The 2,300-kilometre (1,400-mile) long reef -- the world's biggest -- suffered its most severe bleaching in recorded history, due to warming sea temperatures during March and April, with the northern third bearing the brunt.

Follow-up underwater surveys, backing earlier aerial studies, have revealed a 700-kilometre stretch of reefs in the less-accessible north lost two-thirds of shallow-water corals in the past eight to nine months.

"Most of the losses in 2016 have occurred in the northern, most-pristine part of the Great Barrier Reef," said Terry Hughes, head of the Centre of Excellence for Coral Reef Studies at James Cook University.

"This region escaped with minor damage in two earlier bleaching events in 1998 and 2002, but this time around it has been badly affected."

Further south over the vast central and southern regions, including major tourist areas around Cairns and the Whitsunday Islands, there was a much lower toll.

Algae are vital to the coral, which uses the organic products of photosynthesis to help it grow.

The loss of algae makes the host vulnerable to disease and means it will eventually die.

However, coral can recover if the water temperature drops and the algae are able to recolonise them.

"This is the devastating price we are paying for the Australian government propping up the coal industry," said Greenpeace Australia reef campaigner Shani Tager.

"A credible plan to protect the reef must address climate change and start with a ban on new coal mines."

Canberra insists it is doing more than ever to safeguard the reef, which is also under pressure from farming run-off, development and the coral-eating crown-of-thorns starfish, committing more than Aus$2.0 billion (US$1.50 billion) over the next decade.

Scientists estimate the northern region, which teems with marine life, will take at least 10-15 years to regain lost corals, but are concerned that a fourth major bleaching event may occur before that, hampering the recovery.

The reef studies centre warned earlier this year that if greenhouse gas levels keep rising, similar events would be the new normal, occurring every two years by the mid-2030s.

Given reefs need so long to recover from severe bleaching, it said "we are likely to lose large parts of the Great Barrier Reef in just a couple of decades".

That study noted climate change had added 1.0 degree Celsius (1.8 degrees Fahrenheit) of warming to ocean temperatures off the Queensland coast in March, when corals were first seen turning white.

There had been fears that the bleaching would badly hurt the tourism industry but Andrew Baird, who led teams of divers to re-survey the reefs in October and November, said the more accessible parts had not suffered as badly.

"The good news is the southern two-thirds of the reef has escaped with minor damage," he said.

"On average, six percent of bleached corals died in the central region in 2016, and only one percent in the south. The corals have now regained their vibrant colour, and these reefs are in good condition."

Tourism on the World Heritage-listed reef employs 70,000 people and generates Aus$5 billion in income each year.

Australia last year narrowly avoided UNESCO putting the site on its endangered list and must report to the World Heritage committee by December 1 on the progress being made to rescue the reef.