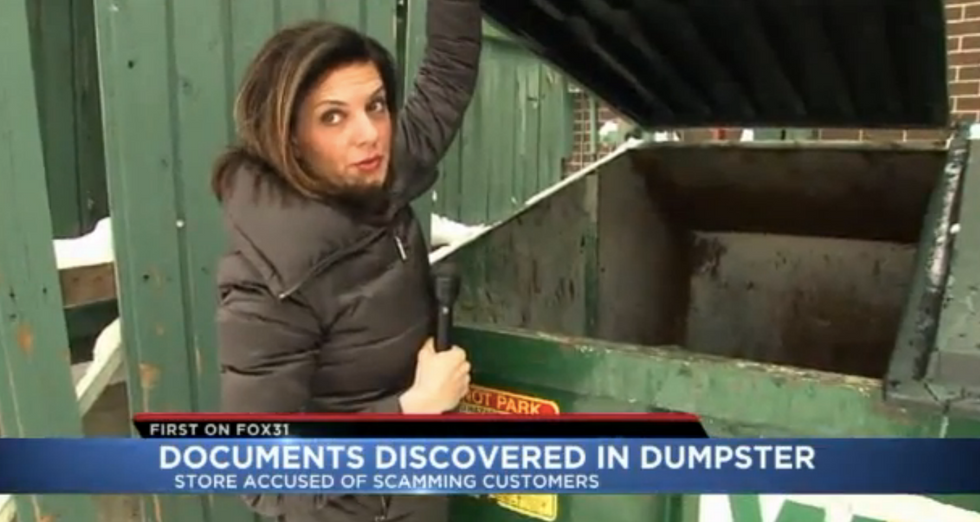 An award-winning investigative reporter at Denver, Colorado's KDVR-TV has left her job after receiving death threats over a story she covered in 2015.

Mediaite said Friday that Heidi Hemmat was KDVR's consumer and business fraud reporter until she received credible and terrifying death threats from a business owner who was the subject of a winter 2015 story.

In an open letter titled "Why I left KDVR and TV news" published Thursday on her personal blog, Hemmat explained that threats from AAAA TV Electronics Repair and Vacuum owner Muhammed Murib drove her out of her job.

"Shortly after he learned about the charges against him, that were a direct result of me, I got a call from his psychiatrist. She told me he was 'homicidal' and was planning to kill me. The psychiatrist thought the threat was so credible, she broke HPPA laws (the laws that protect medical records of psychos, such as the theater shooter–James Holmes) to warn me," wrote Hemmat.

In February of 2015, Hemmat and the investigative team at KDVR received reports that AAAA TV Electronics Repair and Vacuum was cheating customers by charging them for unnecessary parts and repairs and holding the items hostage if the owners refused to cough up the inflated repair fees.

The investigative team was in the midst of an undercover operation when Hemmat received a tip that Murib had disposed of hundreds of receipts with customers' private information in a dumpster behind the store. The reporter jumped into the dumpster and found that, sure enough, hundreds of consumers' credit card numbers and other vulnerable information were there waiting to be stolen and exploited.

Murib confronted her and said he would call the sheriff on Hemmat.

“You probably should," she replied. "They asked you not to throw these receipts away.”

After the confrontation, Murib engaged in a campaign of harassment and threats, but it was in July of 2015 that Murib's counselor contacted Hemmat and warned her that the disgruntled shop owner was planning to murder her.

"She informed me he was on a '72 hour mental hold' but because it was 4th of July weekend, (2015) he would likely be released before then. She then asked me if I had somewhere else I could go because he knew where I lived and of course, where I worked. I remember the chill than ran from the top of my head to the soles of my feet. Of course I had nowhere to go! I have 2 children, then 1 and 3, I couldn’t just leave on a whim –where would I go? And when would I return? Would it ever be safe?" Hemmat wrote.

She filed reports with the police and asked KDVR to please take this threat seriously. She says they did not.

"(M)y boss didn’t see it that way, she did pay for a few days of security at my home, undercover Denver police officers, but when the weekend came, she expressed concern about how much it was costing and downplayed the threat. 'He’s not going to do anything to you,' she said, 'if he was going to kill you he would have done it by now.'”

One day Hemmat received word that Murib had tampered with his police-mandated ankle tracking bracelet and that authorities were unable to locate him.

"I was informed by the victim advocate that he had broke it and the county could not track him. I promptly put my kids in the car and started driving, where? I don’t know. But as they babbled in their little toddler way in the back seat, all I could do was hide my fear, never letting on that their mommy could be taken from them–worse -- they could be injured in the crossfire," she recounted.

Now she has left her job and is spending time with her family, she said.

"All the bosses were happy, but I knew I couldn’t keep ambushing people who did bad things to other people. Society has changed. People have changed. My physical and mental health were unraveling," she said of her job.

After 15 years of service and six Emmy Awards, Hemmat quit the station and has become an independent journalist.

In her Thanksgiving Day letter, she said, "I write with this with tears in my eyes, because I have so much to be thankful for.”

"These accusations are unequivocally false, we took Heidi’s concerns very seriously and provided her with support, security and an attorney, for which Heidi expressed her appreciation. To be clear, we never denied a request for additional security. We are disappointed Heidi has chosen to view the circumstances differently and disparage the station.

We wish her nothing but the best during what appears to be a continued difficult time."