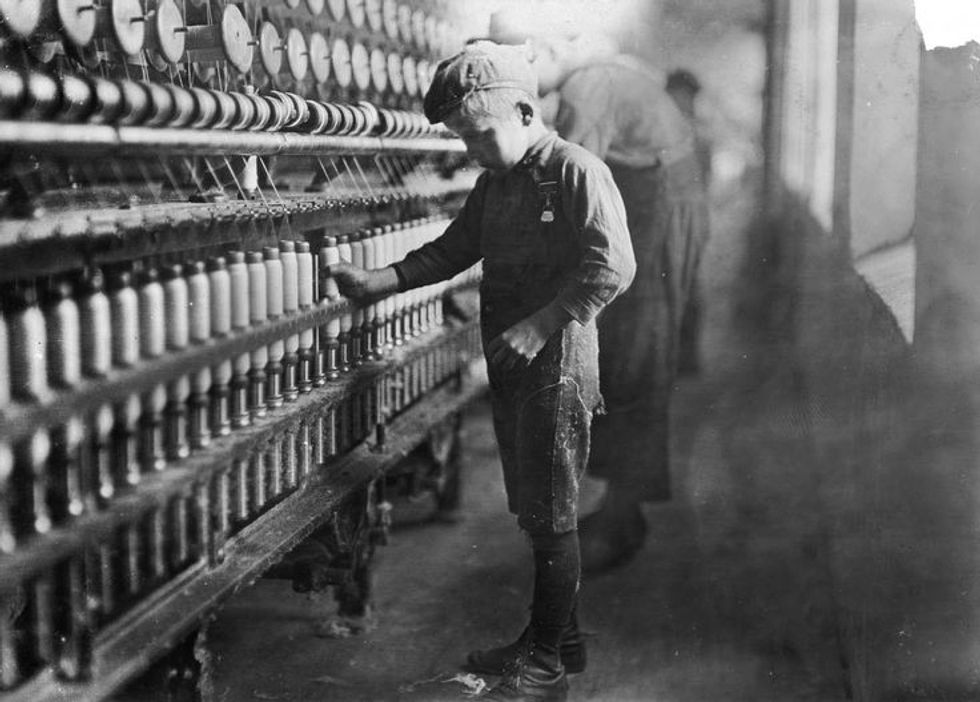 A child laborer (Photo by Lewis Hine, via NC Museum of History.

Now that we know President-elect Donald Trump has tapped right-wing megadonor Betsy DeVos as his pick to lead the Department of Education, now is a good time to examine some of the many shady organizations she's funded.

One such organization is the Acton Institute, a think tank on whose board DeVos has served, and whose self-described goal is "to promote a free and virtuous society characterized by individual liberty and sustained by religious principles."

And one way to promote a virtuous society, it seems, is to bring back child labor.

As Politico's Blake Hounshell notes, a blog post on the think tank's official website extols the virtues of child labor, which it says is a "gift" to children everywhere.

In praising child labor, author Joseph Sunde acknowledges that the practice has gotten something of a bad reputation over the years, and he points to a Washington Post photo gallery of children working in harsh conditions as evidence for why.

Nonetheless, he sees a lot of upside to it.

"The photos surely point to times of extreme lack, of stress and pain," he writes. "But... they also represent the faces of those who are actively building enterprises and cities, using their gifts to serve their communities, and setting the foundation of a flourishing nation, in turn. Turns out there is dignity and meaning in that, too."

He concludes that many kids today have it too easy, and that doing well in school just isn't enough to properly cultivate good character.

"Let us not just teach our children to play hard and study well, shuffling them through a long line of hobbies and electives and educational activities," he writes. "A long day’s work and a load of sweat have plenty to teach as well."