Trump backer Mike Flynn erupts on MSNBC host over Putin criticism: ‘Stop it with that kind of stuff’ 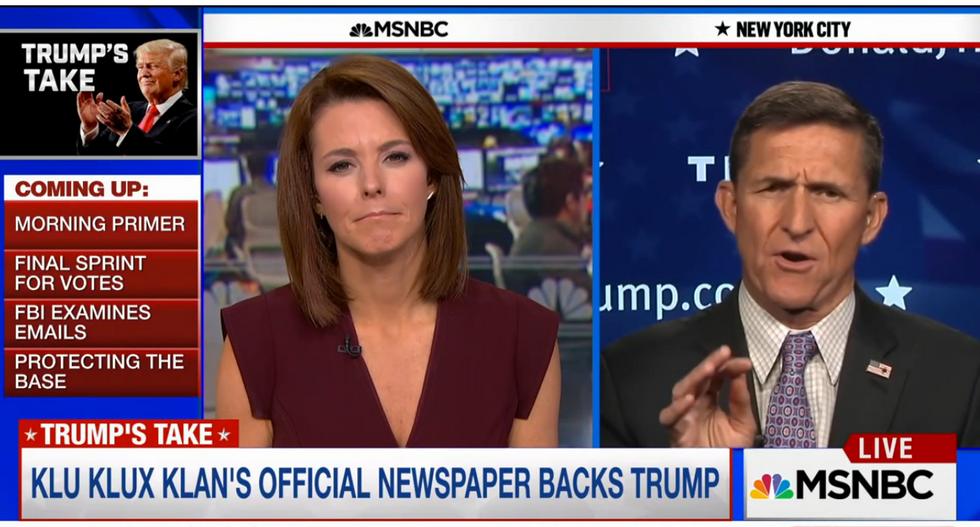 Referencing reports that the FBI is looking into ties between Russia and former Trump campaign manager Paul Manafort, Ruhle asked Flynn how he would describe the Russian president in one word.

Flynn immediately launched into a critique of the Iran deal and Democratic candidate Hillary Clinton as Ruhle attempted to re-steer the conversation. “Is Vladimir Putin someone you’d respect,” the MSNBC host asked. “Someone who kills journalists, who’s invaded Crimea—is that a man you respect?”

“I mean, stop it with that kind of stuff,” Flynn replied.

“How you’re describing a leader in the world,” Flynn said. “Someone that we have to deal with, that we’re dealing with right now.”

Later in the interview, Ruhle asked Flynn to address the nationalistic undertones helping elevate Trump’s candidacy. Before she could even ask her question, Flynn launched into an attack on the host, accusing her of demeaning her credibility as a journalist by “even raising that issue.”

“How many times does Donald Trump have to say he's debunked that organization?” Flynn asked. “Why do you bring this up? That demeans your… you, you're a good journalist. By even raising that issue, after—“

After a back-and-forth, Flynn finally allowed Ruhle to ask whether the retired general is afraid of the “tone” set by some of Trump’s supporters, noting when she’s fearful of the “dangerous” calls to “start a revolution” if the Republican candidate loses.

Watch the video below, via MSNBC.