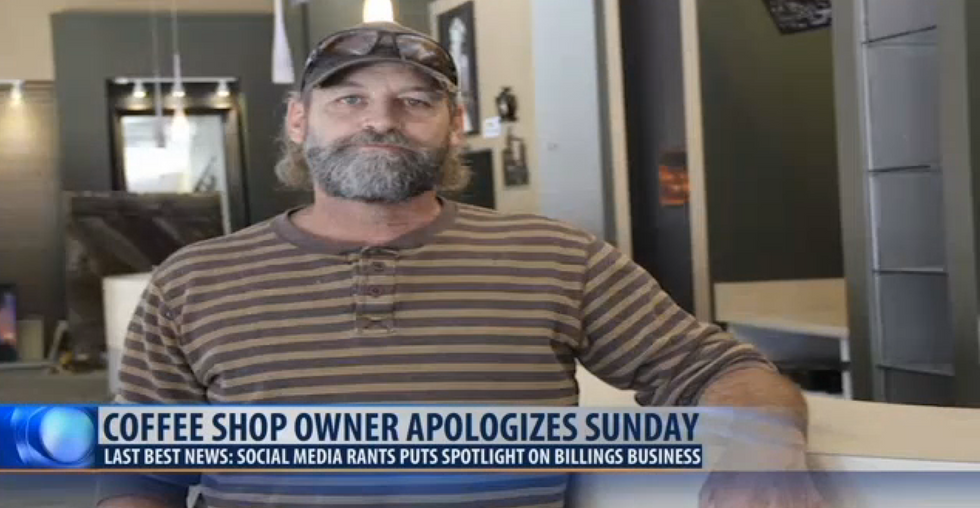 A coffee shop owner in Billings, Montana apologized Sunday after customers threatened to boycott his business over a racist and sexist rant he posted to Facebook.

“I completely apologize,” Coffee Tavern owner Larry Heafner told KTVQ. “It was the dumbest thing I ever did.”

I’m not going to sit and try to excuse my derogatory or negative comments because it was ridiculous,” Heafner continued. “I do want to say, I’m not racist by no means, and I’m not a woman hater.”

Billings resident Josh Schleining reported Heafner’s rant after stumbling upon a comment the coffee shop owner left on a video of a group of black men beating up a white man. “These f*cking monkeys would be hanging if I saw this sh*t,” Heafner wrote on the video, later adding “you don’t see white people do this sh*t.”

Schleining engaged with Heafner, leading to a heated exchange on Facebook. Schleinging and his friends began documenting Heafner’s posts. Per KTVQ:

“Before last week’s election, Heafner shared an image of Trump in the White House, with a caption that read, ‘If Trump wins the election, it’ll be the first time in history that a billionaire moves into public housing vacated by a black family.’

In an earlier post about Hillary Clinton, he wrote, ‘She needs f*cked with a bat! Right up her liberal f*cking ass!’”

The day before the election, when Heafner apparently thought Trump was going to lose, he posted this message: ‘The Coffee Tavern will never recognize a murdering whore for president!! Don’t like it, keep the fuck out!! We don’t tolerate scum!!!’"

“The people that know me know I’m not like that,” Heafner said in an interview after the incident. “I just hope that this community can overlook the stupid comments I made.”

The Coffee Tavern was set to open this week, but due to the backlash from his remarks, Heafner postponed the launch date indefinitely.

Watch the video below, via KTVQ: