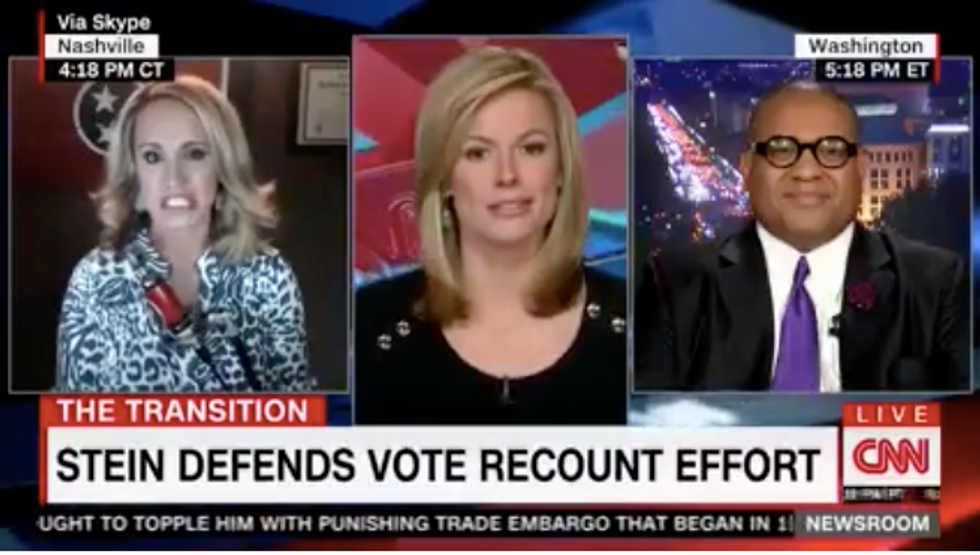 Trump spokeswoman and supporter Scottie Nell Hughes told a CNN panel on Saturday that donors who are contributing to Jill Stein's recount efforts in Wisconsin and beyond are "throwing their money away" and should be using their resources to "reorganize the Democratic Party."

During the segment, Hughes told anchor Pamela Brown that there is no evidence to suggest that election results were hacked or altered.

She also questioned Stein's motives, saying, "Why aren't we questioning the states that Hillary Clinton won? Granted there's not as many of them, Trump won 30 out of 50 states. Why are we just looking at states that Trump won?"

A. Scott Bolden -- former chairman of the Washington, D.C. Democratic Party -- countered that the recounts are concerned with states where Trump won by 100,000 votes or fewer.

Brown asked why the Trump campaign has been impugning Stein's character and saying that she is personally enriching herself when in fact all of the donor money raised is being placed in a dedicated account for the recount.

"Well, it's because when you look at her, she's upped the cost of what she's trying to raise," said Hughes. "If she was just raising the amount she needed to pay the fees and possibly $1 million more for attorneys, she would have raised that two days ago. She's continued to up. She says it will cost more for lawyers and consultants, but she's not giving a bottom line. As more money is coming in, she's asking for money. That's what makes this all look a little conspicuous [sic] as to what her intentions are."

"She says she needs it to file in other states where she hasn't missed the deadline," Brown said.

"That's my question," said Hughes. "People that are actually going in, and I have to wonder who is this, if they're donating so much money to her, more than she raised to run for president, what is their motivation? Do they think they're just throwing their money away? She's wasting dollars. Let's put this to a better effort, maybe to reorganize the Democratic Party so they don't suffer such a devastating loss."

"What difference does it make what her motive is, quite frankly?" asked Bolden. "She's got a right. Here's the most legitimate thing about Jill Stein and a recount. They have no dog in the fight as far as winning that state or winning those electoral votes. This is purely about integrity and authenticity of the election process."