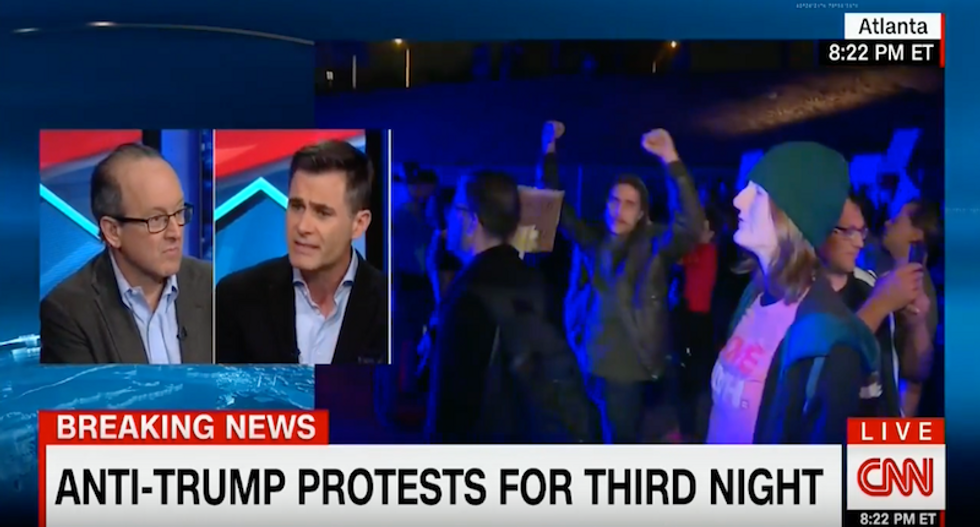 During Anderson Cooper's segment on CNN Friday night, panelists responded to the civil unrest in response to Donald Trump's election victory. As various communities have expressed a concern for their safety, Cooper started off his segment implying that there haven't really been too many incidents of racism or attacks against average people since Trump won. Well, there have actually been at least 100 of such incidents and Raw Story continues to compile reports of violence from around the country.

Panelist Christine Quinn told Cooper about the various reported acts that have occurred on college campuses across the United States. He responded, I'm not condoning, but I don't want to give a false impression."

On the matter, Clinton supporter Jonathan Tasini chimed in that the fear is deep and in some ways has contributed to the thousands of people taking to the streets in protest. "I think that fear is coursing through America," he said. "It is part of the reason you see these protests in the streets. People, when you talked about Donald Trump saying he'll change his rhetoric, you know, this was not just this campaign rhetoric where you're attacking the other side. This was bigotry, racism, hatred, misogyny. All repeatedly."

Trump surrogate Andre Bauer chimed in. Cooper asked him whether the same people would be commending anti-Hillary protests had Hillary Clinton been elected. That's when Bauer took a line from Disney's Frozen and started singing, "I say let it go, let it go."

Bauer then continued to defend his candidate, saying he will be a great leader and noting how he has changed his tune to be one of unity.

"If Hillary had been elected president I would sit here with the most optimistic attitude, at least until she got in office and made some decisions," Bauer said. "I think you are seeing the emergence of the next great president."