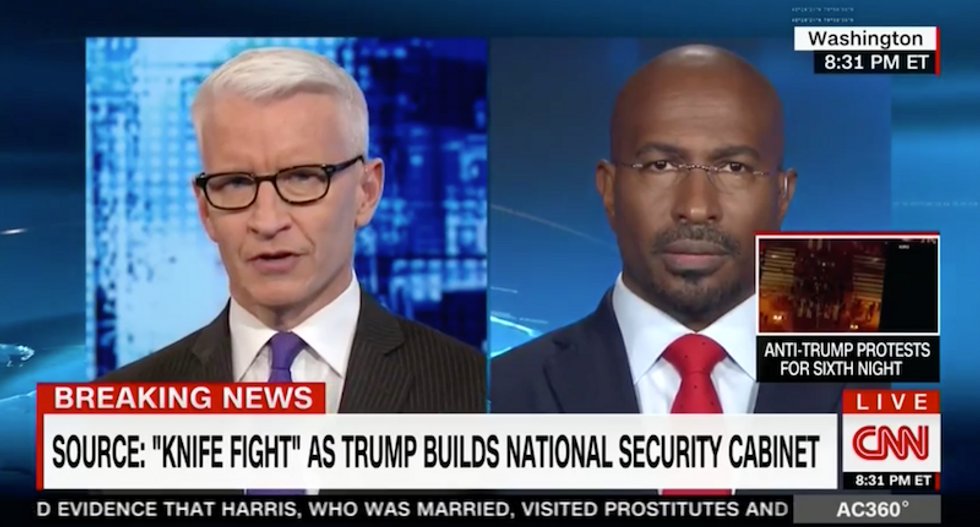 Less than a week after the United States elected Donald Trump as the 45th president, many across the country are still trying to grapple with what this means and how to move forward.

The media, however, has already started to normalize the idea of a Trump presidency — as if his entire campaign never happened.

During an appearance on CNN, Van Jones spoke out against this phenomenon, noting that Trump and his appointees need to be held to a higher standard.

Anderson Cooper said to Jones, "Van, last night the spokesman for Senate Minority Leader Harry Reid released a statement that read in part, 'It is easy to see why the KKK views Trump as their champion when Trump appoints one of the foremost peddlers of White Supremacist themes and rhetoric as his top aide.'"

Cooper was pointing to Trump's appointment of Stephen Bannon — the executive chairman of Breitbart — as his chief White House strategist, something about which white nationalists across the country are thrilled.

Referring to Reid's comments on Bannon, Cooper asked, "Is that taking it a step too far?"

"Well, I don't think so for the following reason," Jones started. "I think it's really important that we not adapt to absurdity. A big part of the impact of the Trump movement has just been to drive the national standards further and further down so that we got to a point where just the fact that Donald Trump could read a teleprompter without insulting half of the country was a massive achievement."

"When you're talking about White House appointments," Jones continued, "We tend to hold people to very high standards. The idea we would now say, 'Well, you put out a publication that, you know, that gave aid and comfort and a platform for anti-Jewish bigots and for white nationalists but you didn't actually write all the articles, therefore, you're okay?'"

Jones said, "Again, that's not the standard. The standard is this is the highest office in the land."

There are plenty of reasons to be critical of Bannon as a top aide in the White House, namely his white supremacist and misogynistic values. Not only has Bannon engaged in overt racism, he has also been accused of domestic violence.