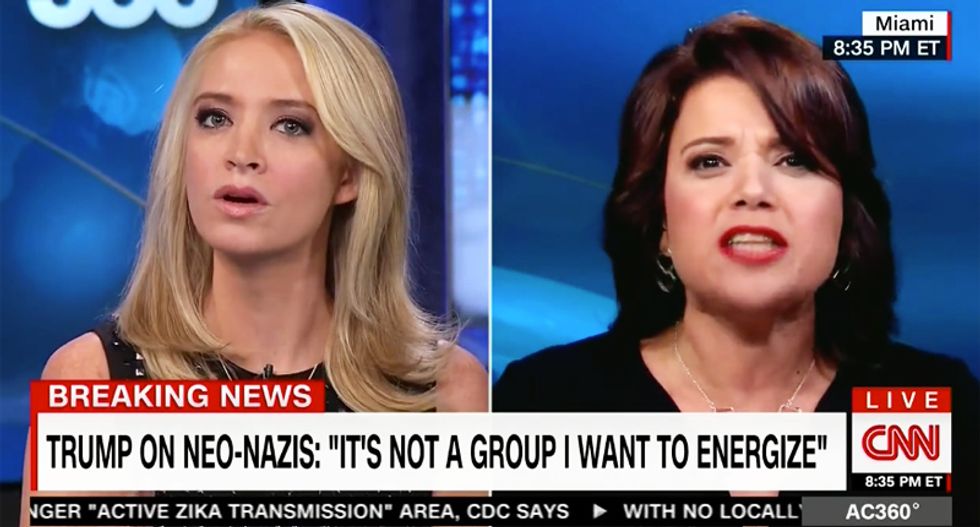 During a CNN segment on Tuesday night, commentator Ana Navarro went at it with Donald Trump surrogate Kayleigh McEnany.

Panelists discussed Trump finally coming out and condemning the white nationalists who have supported him throughout his campaign, and have been emboldened by his win.

Jeffrey Lord suggested that it was a matter of "identity politics." However, Navarro said of Lord, "He supported a candidate who is now President-Elect that has spent the last 18 months using identity politics as the wedge issue. Do you think when he calls Mexicans rapists and criminals that is not identity politics?"

She continued, "What Donald Trump has to do to is take responsibility. He's unleashed the Kraken, and it is not a coincidence that after he got elected, hate crimes spiked up. It is not a coincide the KKK celebrated his victory and wanted a parade in North Carolina."

McEnany, who has consistently been an apologist for Trump throughout his campaign and increasingly since his win — going so far as to suggest that Trump is the only candidate to repeatedly denounce racism — came to his defense yet again.

"This is what those who don't like Trump choose to ignore," she said, "He started out his presidency, pretty much the first words out of his mouth were 'I want to be a president for all races and religions.' Bryan Lanza put a statement out last night denouncing all racism on behalf of the administration. ... [Trump] looked in the camera on 60 Minutes and said 'Cut it out.'"

She continued, "If it were up to you leftists, he would spend every day standing on top of the Trump Tower saying 'I'm not a racist.' He's not going do that ... He's already done that four times."

McEnany told Navarro that she hopes Navarro reassures these kids that Trump isn't a bad person, that they don't need to be afraid, and that it is her responsibility to do so.

And Navarro was not happy. "Do me a favor and don't lecture me on responsibility," she said.